Home Articles What's in it for businesses to engage with apprenticeships?
ArticlesCareer and employmentEmployer ArticlesPolicy

What’s in it for businesses to engage with apprenticeships?

The Indian apprenticeship landscape has been marred by low participation rate owing to a host of reasons- not least, reluctance on industry to engage apprentices. This is our clarion call to encourage you to consider starting an apprenticeship programme and make skill building the bellwether for employability in the country.

Why Should You Bother

Why and how a business should adapt to and adopt the government’s apprenticeship offerings has not been very clear, a key reason being lack of awareness. As of 2015 India had only 4 lakh apprentices engaged by 28,500 of its 6.3 crore enterprises in formal apprenticeship programs.[i]

These numbers are lamentable considering 15 million enter the Indian workforce every year with scarcely any employable skills. The role of the services sector in India’s GDP make-up is significant-  58 percent, compared to 16 percent from agriculture and 26 percent from industry.[ii]

Herein lies an enormous power with India’s SMEs, such as yours, to take skill building to the next level and make an invaluable contribution to the alarming predicament of skill shortages in the country.  The potential difference that MSMEs can make is enormous. Case in point- according to MSDE figures, central PSUs, central government and the banking sector engage around 50 lakh employees.  Engaging even the mandatory minimum limit of 2.5 percent of the total manpower strength as apprentices, the number could reach 1,25,000. And these are only for government-run establishments. The Fifth Economic Census estimates 20,62,124 MSMEs in the country with 6 or more workers. Each establishment engaging even one apprentice can generate 20 lakh apprentices.

Why Start an Apprenticeship

The Apprentice Act 1961 makes it mandatory for employers with 40 or more staff to engage 2.5-10 percent of their total workforce as apprentices for a period of 6-24 months. Whether you fall into that band or not there are plenty of reasons why you should start thinking about an apprenticeship program.

The ILO’s Senior Skills Specialist, Ashwini Aggarwal, describes a Quality Apprenticeship as a ‘system which contributes to matching skills in demand in the labour market with skills acquired in education and training systems, enabling young people to transition from the world of learning to the world of work.’ The benefits of such a system are multiple.

The government has embarked on an ambitious mission to train 50 lakh apprentices by 2019-20 under the National Apprenticeship Promotion Scheme (NAPS). In general, apprenticeships worldwide lay out the following common benefits:

Business sense– An apprenticeship is a carefully thought out in-depth programme of skilling in very specific skill sets which they master over a longer period of time (compared to an internship). A highly specialised individual comes out at the end of the training period who is also extremely well versed with the ethos and business objectives of the company. This individual is the perfect fit for the business and absorbing them as a full-time employee is almost a no-brainer. The business gets exactly what it wants by training the individual precisely in their ways.

Financial Sense- An ILO research looked at the financial rationale of employing apprentices by examining Indian SMEs. It found that the benefits of hiring an apprentice exceed the costs for Indian employers within the first year of retention as a full-time employee.  The table presents a snapshot of case-studies undertaken for this research. 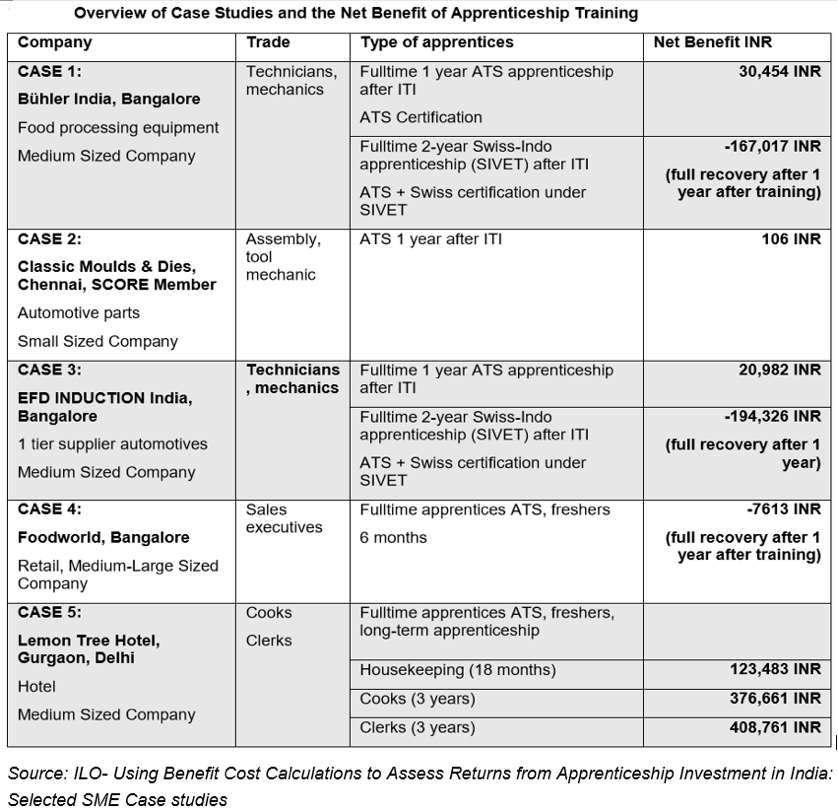 Increased brand value– A well-designed apprenticeship can increase the extrinsic value of a brand.  The prospect of landing a ‘hot job’ with a company can have a knock-on effect where the best and the brightest scramble for the position.

Ethical sense- Consumers are increasingly conscious of dealing with ethical businesses doing their bit for society. Apprenticeships are an upward social mobility route providing youth with an alternative career path. This is especially relevant in the Indian context where every year around 75 percent of youth entering the job market is not job-ready.

The Apprentice (Amendment) Act in 2014 brought about a raft of industry-friendly changes shifting power to employers like you to start apprenticeships. We have outlined in detail the key changes in the Act in our upcoming sister blog ‘Toolkit for Employers to Start an Apprenticeship’. Here is a snapshot of the important changes:

How You Can Engage Locally

For an employer like you to contribute to economic development and labour market performance local to your area, and to play an active role, the design of national schemes allows the freedom to shape local requirements.  This means relinquishment of national powers to local regions and from here to local employers.  For instance, in Western Australia,[iii] an employer witnessed skills shortages in the local construction trade due to a surge in labour demand from a booming mining industry. The employer approached the regional government to form a group representative of the state government, industry councils and trade unions. This paved the way for a new competency-based skilling framework specific to the construction trade in line with recent demand.  This is a glowing example of how employers and the state machinery can work hand in hand for skill building and job creation aligned to their local needs.

A rapidly changing employment composition indicates a shift from agriculture to industry and services sectors. G20 Employment and Labour Ministers have underlined the urgent need for developing quality apprenticeship programmes which businesses can tap into to stay ahead of the curve and put a stop to the country’s absolute decline in jobless growth.

The government has set in motion a number of initiatives and changes to ratchet up the whir and warble of skill building. Recent developments have definitely made it easier for businesses like you to embrace apprenticeships. A skilled in-house apprentice is probably the best recruit you could have.

‘It is up to industry now,’ said Mr. Sougata Roy Choudhury, Director CII, in 2015 at a series of CII workshops to improve awareness on opportunities available for employers in apprenticeships and skills building,

If we have managed to spawn your interest in the possibility of starting an apprenticeship in your workplace, stay tuned for our sister blog on ‘What Does It Take to Get an Apprenticeship Program Off the Ground – A Toolkit for Employers’.

[i] Why India needs to add a new skilling chapter to apprenticeships, Mar 15 2016, Economic Times