In a country where many skills have societal gender-based labels, how do Indian women fare when it comes to access to skill training and vocational education?

India is ranked 121st out of 131 countries in Female Labour Force Participation (FLFP) by a 2017 World Bank Report.[i] The economic loss due to the under-representation of women in the workforce is staggering. A McKinsey Global study in 2015 found that India could increase its GDP by 16-60% by 2025 if only women were given equal employment opportunities [ii] on par with their male counterparts.

The share of women in services and industry is less than 20%.[v]

Education and the Girl Child

According to educational statistics published this year (2018) by the MHRD’s Department of School Education & Literacy, laudable progress has been achieved in girls’ enrollment in elementary and secondary education in India. 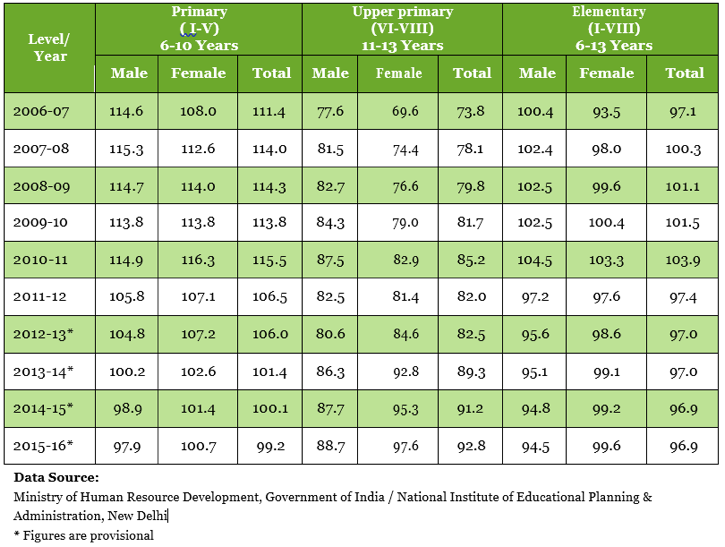 Similarly, The Annual Status of Education Report (ASER) 2017-Beyond Basics, conducted a survey of 14-18 year olds in 26 rural districts across 24 states. 86% of youth in this age group were enrolled in a school or college with no significant difference between boys’ and girls’ enrolment at age 14.

It should come as a surprise and cause for alarm that despite India’s economic stride and higher enrolment of girls in education the percentage of women withdrawing from the labour market has been rising compared to a decade ago when 43% of married women in the age group of 15-49 years had reported working in the past year in 2005-06; this number dropped to 31% in the latest 2015-16 survey conducted by National Family Health Survey (NFHS). Higher education enrolment figures are not translating into an increase in women in the workforce which begs the question why.

The reasons for the decline in women in India’s workforce continue to be a complex mix of age-old stereotypes and new economic changes. Especially in trades requiring specialised skills, there exist typical ‘male roles’ which automatically eliminate women. Besides, rising income of men have pressurised women to continue as home-makers depriving them of income-generating skills and activities. There is also the not so new issue of lack of quality jobs for women as again the majority of skills based jobs are taken up by men. The National Sample Survey Office (NSSO) further attests this unfortunate trend. Case in point, the urban male population made up 16% of India’s total population in 2011-12 but held 77% of all jobs in computer-related activities.

A vast majority of uneducated and economically backward women make up the female workforce in India. Women in agricultural, seasonal or manual jobs have little or no skill training. Providing access to skill-based training to this set of the population is where the challenges and the opportunities exist. The significance of vocational training in such a scenario is seen in a 2017[vi] study where skills-based training (formal or informal) correlated with a higher likelihood of women joining the workforce regardless of educational levels.vii

Speaking of the stark need to include more women in skill-based training, Rajesh Agarwal, Joint Secretary and CVO at Ministry of Skill Development and Entrepreneurship (MSDE) said, “India can increase its GDP by 16% if it achieves gender parity in its workforce. There is a need to make a conscious effort to address women issues and Ministry of Skill Development and Entrepreneurship is mindful of this fact.”

Women’s Vocational Training Programme under @MSDESkillIndia  provides skill training to women through a network of Industrial Training Institutes (ITIs). Approved training programmes impart skills to women under various schemes such as Craftsmen Training Scheme across trades such as electronics, mechanics, architectural draughtsmanship, computer operator and programming assistant, secretarial practice, cosmetology, dress making, catering & hospitality, interior designing, amongst others. To attract women from economically backward backgrounds these schemes also offer merit and/or means-based stipends and accommodation. Currently, there are 19 National Skill Training Institutes which run women-focused vocational training. A total of 4664 seats have been sanctioned for women in 2017-18, and overall 1,45,000 women have been trained by these institutes.

Echoing the importance of such schemes Rajesh Agarwal, Joint Secretary and CVO at @MSDESkillIndia highlighted pan India government training initiatives for women.  “As per the information furnished by the respective State Governments, there are about 405 Women ITIs and 1003 Women Wings in general ITIs/ITCs having a total of 83,270 training seats as on Jun, 2017,” he said. “Last year, we have had around 1.34 lakh women train from our ITIs. There are great examples of women who have also been trained in hard skills like welding etc. We are also focusing on promoting skill development in local trades, art and culture where more rural women can participate and will not have to migrate,” he added.

Furthermore, under the government’s efforts to vocationalise secondary and tertiary education, one of the provisions of the National Vocational Education Qualification Framework (NVEQF) is a proposal for a one-off financial assistance for the construction of women’s hostel in 500 polytechnics as a way to attract more women to enroll in such education. Another provision is the Jan Shikshan Sansthan expected to prioritise vocational training needs of illiterate and semi-literate women in urban and rural India. 17 trades have been approved as of 2016-17 under vocationalisation of education, such as retail, beauty & wellness, tourism, gems & jewelry keeping in mind interests of the girl child.[vii]

Apprenticeships and other vocational training in India do not reach the majority of women from rural and semi-rural areas at the required spread or pace forcing them to work as unskilled labour in the unorganised sector. Additionally, women need to be encouraged to consider atypical skills and not limit themselves due to gender stereotypes. At the same time, without having to re-invent the wheel, the quality of training for traditionally women friendly skill based roles needs to improve so they are at par with trades dominated by men in terms of wages and perceived value. If more Indian women joining the workforce has the potential to add $770 billion to India’s GDP by 2025,ii it goes without saying that women in India are a severely untapped economic resource and to close the asymmetry in the labour market a fundamental shift needs to take place in the national context.

v. Women and Work in India: Descriptive Evidence and a Review of Potential Policies, Dec 30, 2017

What skills do you need to succeed in the post-pandemic world?

0
What skills you need to succeed in the post-pandemic world The economic crisis brought about by the global...
Read more
Articles

The future of workforce in retail sector – James Raphael

0
Under the Skill India movement of the government to create skilled resources, a lot has happened in the area of apprenticeship in...
Read more