How Organisations Can Become Temples of Skilling

Indian organizations are veritable fertile grounds of skilling and knowledge sharing. Private sector forms 75% of India’s investment demand according to an HSBC (2016) report.  The transformational effects of in-house corporate skill development programs through apprenticeships or vocational training can have an enormous impact on addressing the prodigious problem of skill shortages in the country.

Addressing the National Conference on ‘Skilling India for Global Competitiveness’ in April 2017, the then Vice President of India, M. Hamid Ansari, said, ‘By 2020, almost 60 percent of India’s population of 1.3 billion will be in the working age group of 15-59 years. Of these, 144 million will be in the 18-23 age bracket. The key to reaping our demographic dividend would be to adequately skill our people.’

On the flip side, to expand on the above take on the characteristic of India’s demographic makeup, dropout rate from formal education peaks at the secondary level (class IX-X at 17%, as compared to 4% in elementary school (class I-VIII) and 2% in upper secondary school (class XI-XII). Moreover, transition rate (likelihood to continue in education) is the lowest at the secondary level (from class X to class XI) at 69%.[i]

Is there a future for these millions of youth dropping out before or at the secondary education stage in empowering themselves and contributing to the economy? This is a dire predicament facing the nation. According to the Annual Skill Report 2016-17 @MSDESkillIndia a dismal 4.69% of India’s workforce has formal vocational skills, as against 60%- 90% in developed countries.  Moreover, A FICCI-Ernst & Young (2012) report on skill development which had forecast 50–70 million new jobs up to 2017-18, had stated that 75%–90% of those jobs would require some form of TVET education.[i]

What Can Organisations Do

Jobs need skills not qualifications. With an annual turnout of an estimated 3.5 lakh engineers and 2.5 million university graduates, and where an estimated 5 million graduates are out of work at any given point the answer to India’s low employability is skilling. As of 2017, Germany had 3 million apprentices while India had a tenth of that[ii]. The National Apprenticeship Promotion Scheme (NAPS) 2016 has a vision to train 50 lakh apprentices by 2022. What can organisations do to get close to this milestone?

Some of the major economies of the world have crafted conducive apprenticeship and vocational education models in recognition of the enormous potential of the learning-by-doing and learning while-earning model. Numerous research has pointed to apprenticeships as a fundamental, proven method for large-scale efforts to skill a nation’s workforce. In India too, programs designed around the needs of companies add tremendous value in skilling and retaining the best.

Noteworthy employers from Indian industry who have adopted the apprenticeship model have invested not only in the future of the individuals, but in the company’s competitiveness and the value it attaches on developing talent.

We look at a few corporate vanguards in skills training in India who have successfully blended an apprenticeship programme into their businesses, turning their shop floors into temples of learning. We especially highlight programs that target youth below the graduate level who as an age-group are particularly vulnerable to lack of skilling and employment opportunities.

Shop Floors of Establishments as Classrooms

Apprenticeship and skills training in India is provided through various government schemes and ITIs, ITCs, VETS, polytechnics and corporate training programs. Companies such as Mahindra & Mahindra, Maruti Suzuki Ltd. and TATA Motors have established training facilities that offer training programs in line with their business needs. Larsen & Toubro for instance has eight Construction Skills Training Institutes (CSTIs) across the country to skill workers such as carpenters, fitters, masons, plumbers, bar-benders, turners, wiremen, welders and electricians on in-demand procedures and practices. In 20 years over 50,000 technicians have received training from CSTIs and over 1,50,000 workmen of subcontractors; another 1,25,000 workmen through MoUs & joint ventures and more than 2,00,000 workmen through e-learning modules have further benefitted from skilling programs.

Other long established skilling programs in the country help benchmark Indian skills training against international standards.  Volkswagen India Private Limited runs a 3 1/2 years Apprenticeship Programme in Mechanic Mechatronics and a 2-year Apprenticeship Programme in Welder (Gas & Electric). Both programs follow the highly successful German dual system (20% theory, 30% hands-on and 50% industrial exposure) of vocational education and are open to candidates under age 17 who have completed 10th grade exams in the year preceding application to the programs.

In a first in industry initiative by an automobile manufacturer in India for after sales operations, earlier this year, Hyundai Motor India Limited, partnered with the Automotive Skills Development Council (ASDC) to provide training and create jobs for unskilled individuals with a minimum qualification of 8th grade. Training will be imparted at six Hyundai dealerships associated with Hyundai’s world class Technical Training Academy. Hyundai Motor India has tie-ups with 45 ITIs and 7 polytechnic institutes across India to train candidates on a specially designed curriculum. The company claims a 99% absorption rate of trained graduates from its skilling programs by Hyundai dealerships in 2017. In March 2018 Hyundai inaugurated its seventh state-of-the-art Hyundai Regional Training Centre in Ahmedabad to provide specialised technical and soft skills training to 1,700 individuals. In 2018 Hyundai aims to train more than 20,000 individuals across all its training facilities.

Bosch India’s skill development objective is to ‘develop a reservoir of skilled personnel required to produce quality products on sophisticated machines.’ Bosch commenced its skill development program in India in 1961. Since then its Bosch Vocational Center has won ‘Best Establishment’ Award 53 times and has trained over 3400 apprentices. As of June 2017 Bosch has established 25 ITIs in Karnataka, 33 in Maharashtra, and 30 in Rajasthan.

Bosch provides basic and advanced training modeled on the German dual education system. Trade apprentices in nine technical trade certified by the National Council for Vocational Training are taken on board immediately after their tenth grade and undergo basic common training in the first year. Job specific and industrial training starts in year two at the end of which advanced training in specialised operations is imparted.  Emphasis is placed on accuracy and high quality on par with global standards.

Stressing on the skilling capabilities of such frameworks, Mr. Soumitra Bhattacharya, MD & President, Bosch India, has said, “It is a comprehensive program where youngsters receive theoretical and practical classes and use our laboratories and machines in the workshop. This is besides getting trained at our factory premises.” Another model is Bosch’s BRIDGE program, which stands for ‘Bosch’s Response to India’s Development and Growth through Employability Enhancement’, a two-month ‘express’ job-oriented program for school drop-outs from economically deprived backgrounds. As of August 2017, 88 government ITIs serve as BRIDGE centers. The BRIDGE program has trained and helped place more than 7500 unemployed youth in entry-level jobs. Highlighting Bosch’s two-pronged approach, Mr. Soumitra Bhattacharya adds “We will touch 10,000 children a year in one year. We are focusing on two things – one, quality skill education comparable with Germany in the Bosch Vocational Center, and a short duration quality training of 2-3 months which we give back to the society.”

Up until August 2017 Bosch’s has impacted 13,500 beneficiaries through its skilling programs- 3,500 apprentices through Bosch Vocational Center, 10,000 youth through BRIDGE, and around 100 artisan trainees.

Other Champions of Skilling

The Associated Chambers of Commerce & Industry of India (ASSOCHAM), is an apex trade association representing the interests of trade and commerce in India since the 1920s. Lending a strong voice to skills based and vocational training ASSOCHAM has drawn much needed attention to the contribution and efforts of various entities involved in skill development through prestigious annual awards. 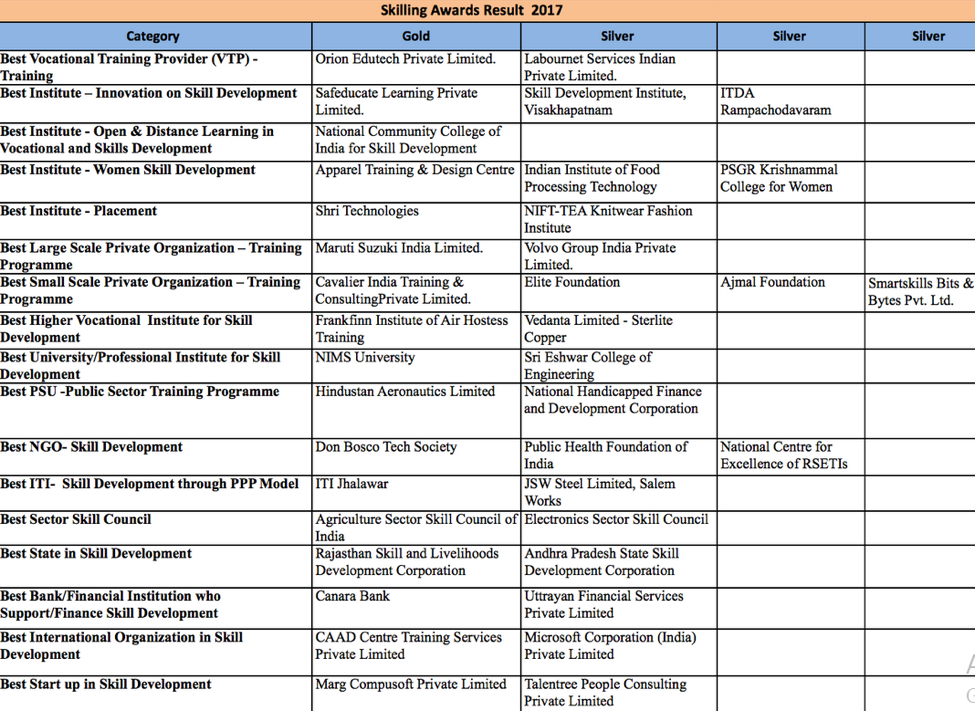 Notwithstanding the numerous accounts of success, many more organisations need to board the skilling bandwagon to have a multiplier effect to bridge the capabilities gap in the country. If we consider figures as of Oct 16th 2018 from the All India Council for Technical Education (AICTE), which is the national-level apex organisation on facilities available for technical education, the total number of institutes engaged in training in 2017-18 was 10,400 of which total unaided private entities was 8,248. The total intake capacity was 35,52,483. If 50–70 million new jobs were created in 2017-18, with a 75%–90% of those jobs requiring some form of TVET education,ii the road to skilling is a long one. For any significant shift to occur in India’s skills gap a surge in participation by industry as catalysts and centres of skilling by opening its doors to robust corporate skills based training programs is imperative. Organisations are perfect incubators of skills and India urgently need more of them to lead from the front in the adoption of apprenticeships and vocational training.

i. Educational Statistics At a Glance, 2018, Department of School Education & Literacy, MoHRD