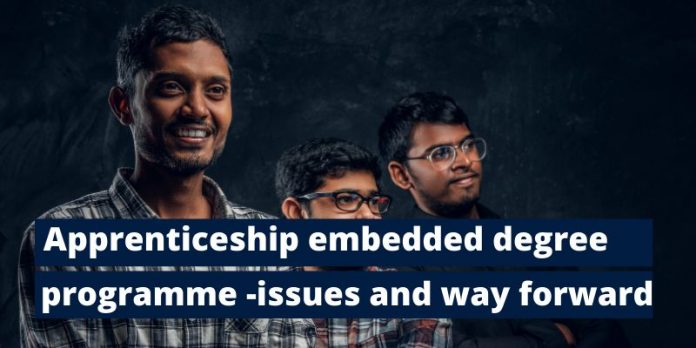 The education world and the apprenticeship world have coexisted in India for nearly 6 decades; the skill world has also been around for more than 10 years now. And yet the industry says it doesn’t get manpower who they find ready to deploy without incurring expenditure on post recruitment training, and employability for most youngsters after graduation remains an issue. If there is a connector which can stitch all of this together, it is apprenticeship. While the signalling value of apprenticeship, as an effective last mile training tool which gives the much needed practical exposure to a youngster, has always been well accepted by the industry, it had not really taken of in India despite being a law since 1961. However, it seems to be at last, becoming a distinct and real possibility on the ground in India following the comprehensive reforms in the Apprentices Act/Rules made by the Govt. in 2014/15, as a part of one of its first major initiatives bringing industry into the centre stage of the programme. And the focus on apprenticeship embedded degree programme in the National Education Policy (NEP) announcement, can only take this momentum forward.

The UGC Guidelines issued in July/August 2020 as a follow up to the NEP is a good first step towards implementation but only the first-a lot needs to be done & the nitty gritty around the roll out path has to be right for it to ground.

Some of the important open issues which need to be addressed on priority are as under: –

In this context what is important to note is that under the Optional Trades window the industry does NOT need any prior approval of the Govt. to design and run the apprenticeship programme -it is required to only “ disclose the duration and syllabi of the optional trades on the portal site.” (Rule 7A(6) of the Apprenticeship Rules 2015).

A common thread running across all the three is that they all fall under the Apprentices Act and has the industry formally contracting the students as apprentices and paying a stipend to them.

In order to roll out a comprehensive apprenticeship embedded degree programme as envisaged in the NEP and the latest UGC Guidelines on the subject released after the NEP in July 2020, therefore, all of the above strands need to be knitted into a whole and an integrated way forward etched out. The Govt. will need to ensure the following:

The recent trends indicate that industry is beginning to accept the programme in its current form in a big way with number of contracts under the optional trades umbrella going up 5 times during 2019-20. A recent study by Dalberg/DFID, perhaps the first after the reforms reveals that 67% of the companies surveyed believe there is a net positive value in apprenticeship; 57% see long-term gains. An ROI study of Apprenticeship done by the India Apprenticeship Forum reveals that by following the apprenticeship route industry found its hiring cost being reduced by 50%, the rate of attrition reduced by 10-25%, while productivity increased by 20-25%. Hence, the focus on apprenticeship embedded degree programs could not have been better timed and is the next logical step forward. If we can structure the roll out properly, and use apprenticeship effectively, to integrate the education, skill and the employment world, the twin problem of employability for the youth and a ready to employ skilled force for the industry can be resolved to a large extent and India can well and truly be on its way to becoming the global skill capital.