Home Articles Re-skilling the Workforce - why it is necessary and how it can...
ArticlesCareer and employmentEmployer Articles

“With record talent shortages around the world, it’s no longer a question of simply finding talent; we need to build it,” ManpowerGroup Chairman & CEO Jonas Prising.

The skills mismatch in India is obvious. Around 15 million people are said to join the country’s workforce every year over the next decade of which over 75 percent are not job ready. This somber reality is due to a skills crunch. It doesn’t help that the country has a total training capacity of only around 4.3 million.[i]

By 2020, almost 60 percent of India’s population of 1.3 billion will be in the working age group of 15-59 years. This hugely advantageous demographic dividend which can well become a watershed moment for the next wave of economic prowess is paling in the face of the severe unemployability quandary in the country today.

Skilling and re-skilling are two sides of the same coin. According to a FICCI-Nasscom & EY report,[ii]  9 per cent of the country’s 600 million estimated workforce would be in new jobs that do not even exist today, while 37 per cent would be working in jobs that have extensively changed skill sets. This has given rise to the pressing need to mass reskill the labour force, which the Indian IT sector has taken due cognizance of to some extent to gear up for the Fourth Industrial Revolution. India’s top five IT firms, with a collective employee base of more than a million people, re-skilled around half of them as of March 2018 in areas such as cloud-based, analytics and agile software development.[iii]

NASSCOM estimates 40 percent of the country’s four million IT workforce will need reskilling in the near future to keep pace with new age technologies. Earlier this year, Prime Minister Narendra Modi launched a NASSCOM FutureSkills platform which has been developed in partnership with industry to bring curated courseware for reskilling employees. The aim is to re-skill 1 million professionals and an additional 1 million potential employees. Underscoring the importance of re-skilling for the country’s IT industry, Minister for IT and Law, Ravi Shankar Prasad, said at the launch, ‘Even if a technology destroys ten jobs, it will create 100 jobs. This reskilling platform will help manage that transition.’

If we draw out the same sentiment towards other layers of the skill pyramid- such as school drop-outs, the vocationally trained, craftsmen and tradesmen, the mass re-skilling need applies just the same. This was most aptly stated by Subroto Bagchi, Chairman of the Odisha Skill Development Authority, when he said that the impact of new age technologies on Indian industry such as AI and robotics can wait given the perilous situation of unemployable youth and irrelevant skills of those of working age. Real progress he added will come from local small-scale entrepreneurship and ‘nano unicorns’. Mr. Bagchi further said that at the grass root level which is largely comprised of an unorganised workforce if someone gets skilled as a bedside attendant, a sewing machine operator, or a security guard, the life-changing impact on the individual completely over-shadows the relevance of new age technologies at that level.[iv]

The point being, in a country of India’s complexity, skilling and re-skilling need to occur simultaneously at all levels. For instance, if your company specialises in heavy machinery, and is frequently bringing in outside help in specific skills, this might be an area where re-skilling or re-training is needed. Re-skilling in different skill sets can equip technicians to adapt and become more employable across sectors such as construction, services, wider engineering and manufacturing. There is a huge opportunity to tap into a segment of the talent market that might have otherwise been overlooked.

Where the Focus Lies

Online talent measurement solution provider Mettl’s 2018 survey[v] of over 1,500 learning & development (L&D) leaders, found that the focus will be on ‘reskilling the workforce’, for large organisations, whereas small ones will concentrate on ‘improving employee performance’. Other findings were:

Online jobs portal Shine along with the National HRD Network conducted a survey[vi] of nearly 200 chief human resources officers on the significance of re-skilling. 94 per cent of them stated a need for the Indian workforce to re-skill and upskill multiple times in their careers to stay relevant in their jobs. 64.61 per cent of respondents answered ‘no’ when asked if there will be enough skilled workers in the market to meet demand in the next five years.

In yet another recent report, the latest Talent Shortage Survey[vii] by ManpowerGroup, India unceremoniously finds a spot at the top 10 most-affected markets with 56 per cent of employers not finding suitable candidates to fill vacant positions.

The sought after skills according to the survey, are transferable soft skills such as communication skills – both written and verbal, followed by collaboration and problem solving. The findings were similar by a 2017 McKinsey report[viii] which also listed critical thinking, creativity and adaptability as key skills desired by employers.

A popular way to re-skilling is a shift from real to virtual classrooms. This allows employees to learn at their own pace, and to choose modules specific to their learning needs and career prospects. Having said that, a teacher led education is deeply ingrained in the Indian mindset, and in some cases it is also far more effective that a non-interactive purely virtual experience.

Another facet of blended learning especially in re-skilling is actual physical training space to complement online lessons. For instance, Mindtree’s new $20 million training campus in Bhubaneshwar can host 500 employees at any given time and is used extensively for training in areas such as soft skills which is best imparted physically. Classroom based training is also highly relevant for senior leadership re-skilling programmes. As Tata Consultancy Services’ Ajoyendra Mukherjee said, “Leadership and soft skills programmes are still classroom based, so the academies aren’t redundant yet.”[ix] Shea Gopaul, Executive Director of the Global Apprenticeship Network seems to agree that the human factor is integral to the reskilling process. “Even with e-apprenticeships, 40 percent is online but 60 percent has to be with human contact”, she says.[x]

While corporate re-training programmes for graduates and those with higher degrees are most valuable and relevant for those from the tertiary education route, apprenticeships have their own place in upskilling or re-skilling hundreds of millions of working age people.

In recognition of realities in the job market, employers are not just looking into hiring outside talent. Retention of in-company talent is key for business longevity.  Enter apprenticeships, allowing employers to re-skill and shape existing employees already well versed with the company’s ethos and business needs according to new job requirements. Someone with a more versatile background, with training in two or more trades is always a big value add to an employer.

One way to do this is through the offerings of the government’s competency-based National Skills Qualifications Framework (NSQF), where qualifications are graded from one to ten, each level building on the skills of the previous level, and are defined in terms of learning outcomes regardless of whether they are obtained through formal or informal learning. A big draw of the NSQF is that it allows mobility between vocational and general education, Recognition of Prior Learning (see below), and transition from non-formal to the formal workforce. It also allows progression pathways within and across sectors. Another great reason for employers to consider upskilling and re-skilling staff through the NSQF is that come 27.12.2018, it will become mandatory for all training courses to be NSQF-compliant bringing much needed standardisation and harmonisation of vocational training across the country.

Re-skilling through apprenticeships also lowers attrition as it boosts employee morale (older apprentices are paid more than new hires for example) improves in-house creativity, and additionally, when such apprenticeships are government/company sponsored it creates a great degree of goodwill. Ultimately it boosts the bottom line.

RPL is a way of providing credit points towards previously acquired skills and experience and can be a useful tool to re-skilling where points are transferred across to a new qualification or certification. This holds special significance for India where it’s largely unorganised workforce most often pick up informal skills by observing others or come from an ancestral trade. 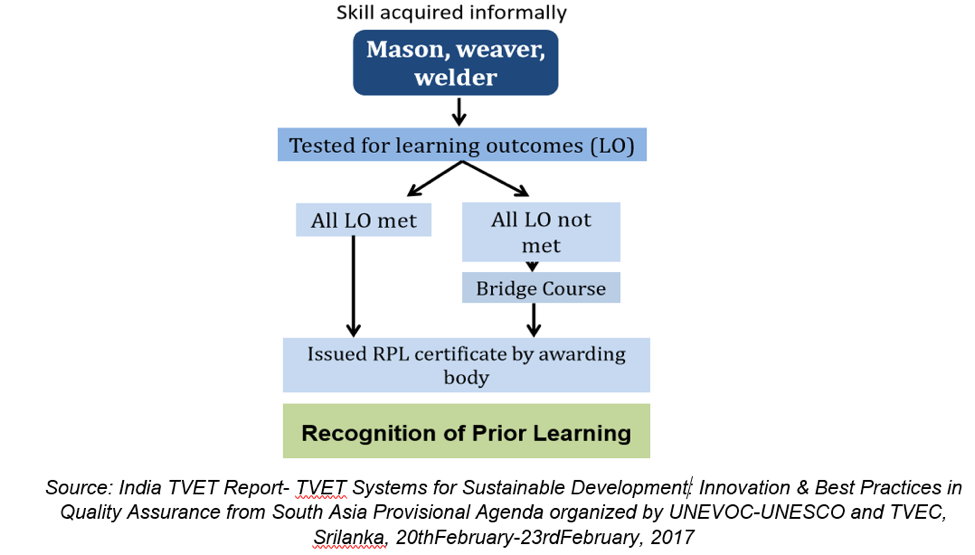 RPL can step in to bridge the gap and help get professionally trained and certified under the NSQF whilst at the same time recognise the value of previous experience. RPL is a key attraction of the Pradhan Mantri Kaushal Vikas Yojana scheme of the Ministry of Skill Development and Entrepreneurship.

In summary, re-skilling and up-skilling have a key role to play in determining skill gaps and employability. The responsibility lies on decision-makers in industry, government and education to become more adaptive to the future workforce.

0
Nagaland government has launched a skilling programme for returnee migrant workers. They will initially train 100 people who had to come back...
Read more
Articles

0
The MSDE and the High Commission of Australia have agreed to collaborate to improve skill training in both countries. This is an...
Read more
Articles

0
A recent survey shows that 54% of employers are having trouble getting skilled people while hiring. It’s easy to get qualified people...
Read more

Positive effects of skilling in the rubber industry