Why the Service Sector Matters for Vocational Training and Apprenticeships

According to a CII report “India Services Sector: A Multi-Trillion Dollar Opportunity for Global Symbiotic Growth” (2017), the Indian service sector is the fastest growing service sector in the world contributing more than 60% to the economy and accounts for 28% of employment. A shift in workforce dynamics from agriculture, hitherto the dominant employer, is already underway.

What are the in-demand skills needed by the next generation of workers in the service sector and is there an opportunity for VET and apprenticeships to fill the skill gap?

To address these questions and more we will be taking you through a series of blog posts over the coming weeks. Each week we will explore opportunities in a new high growth service sector from the point of view of vocational skills.  Part I of the series gives an overview of opportunities that exist in the Service sector. We will cover analysis of specific sectors in terms of opportunities they provide in the apprenticeship space, starting with Retail & E-commerce given its prominent position in the services space and the changing retail landscape. Other key growth sectors, among others, that we will be covering in subsequent weeks are Beauty & Wellness, Travel & Hospitality, and Logistics.

The 2016-17 Annual Report2 commissioned by the National Skill Development Corporation (NSDC) @MSDESkillIndia have identified incremental human resource requirement of 103.4 million across 24 high priority sectors between 2017-22. The negative employment growth rate in agriculture by 2022, as seen below, is indicative of a workforce migration to other sectors; for instance, 28.6% of the country’s population in 2016-17 was employed in the services sector.3

High growth sectors in terms of human capital requirement and skill gap have been identified as:

However, a major challenge as indicated by a FICCI/ Ernst & Young (2012) study4 states that India is one of the top countries globally struggling to supply suitably trained workers. Clearly, there is no demand constraint. An IMACS5 study found the greatest skilling requirement was at the bottom of the pyramid at 66% in Skill level 1, where skill acquisition by the least educated represents an enormous employment creation potential. 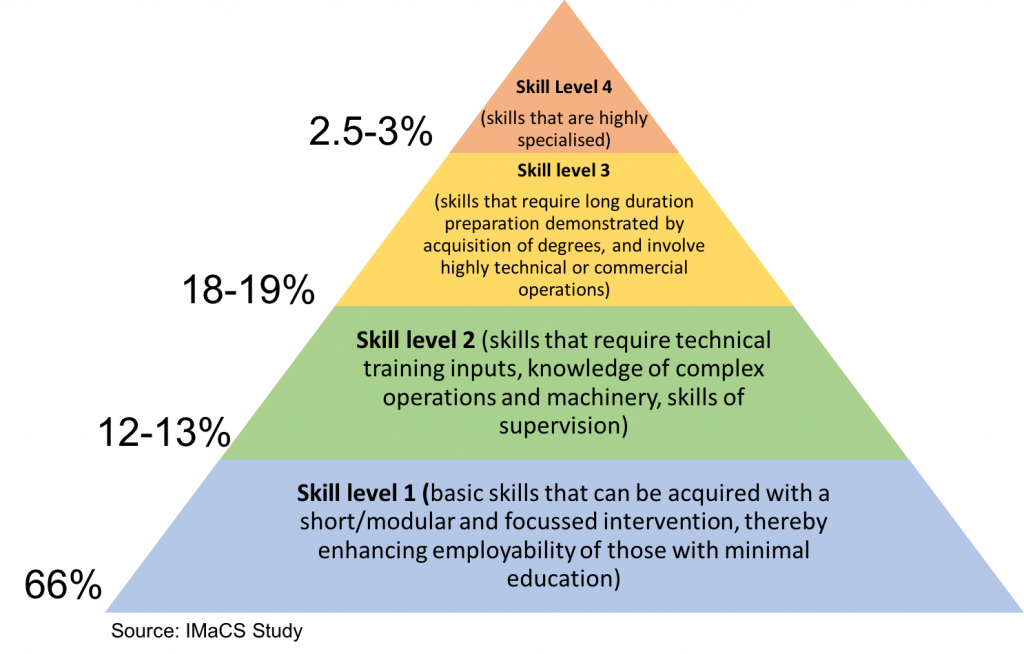 With a gaping skill gap between demand and supply, it has become imperative to shine a sharp light on the urgent need for suitably skilled workers on a nationwide scale to generate millions of jobs, all the more so in the service sector. Skilling the unskilled and the inadequately skilled to ride the service sector wave and reap maximum benefits both for the worker and the economy is indeed the need of the hour.

We find several positive factors that can take employment in the service sector to the next level. The average working Indian will be 29 years old by 2020 as against 37 in China and the US, 45 in Europe and 48 in Japan.6 A young and energetic workforce is a major advantage to skilling and upskilling initiatives. The present government has taken significant steps in recognition of the vital role of VET and apprenticeships in the next chapter of economic development.

Apprenticeships in India have traditionally focused on the manufacturing sector and have been quite prescriptive in nature. Moreover, employers found various clauses and requirements in the Apprenticeship Act (1961) and its various amendments over the years to be regressive and hard-lined such as an obligation for every employer to have apprentices, punitive penalties including imprisonment for breach of rules under the Act, among others. However, sweeping changes to the Act in 2014 have made it much more conducive and industry-friendly. Introduction of new trades under the Act and expansion of the scope of existing trades have given due consideration that apprenticeships in India should no longer be limited to any particular sector. As an alternate career option apprenticeships are still in its infancy in India compared to model nations such as Germany. The journey has started in India too and it is up to all stakeholders to carry the baton forward to make a real difference to the huge skilling problem facing the country.

We begin our analysis of opportunities in vocational and skill-based employment in India’s service sector with Retail & E-commerce.

0
To keep a pool of skilled labour, who are coming from Gulf and other countries ready, National Skill Development Corporation has started...
Read more
Articles

0
The crisis of youth unemployment – especially educated unemployment – has become a major area of policy concern, one that has been...
Read more
Articles

0
Looking at the conventional education system and the emerging relevant job roles as of today, there is definitely a huge skill gap...
Read more

COVID-19 will change the way we work and learn: NSDC MD...

Why undergraduate courses need to teach skills to help graduates get...