The future of workforce in retail sector – James Raphael 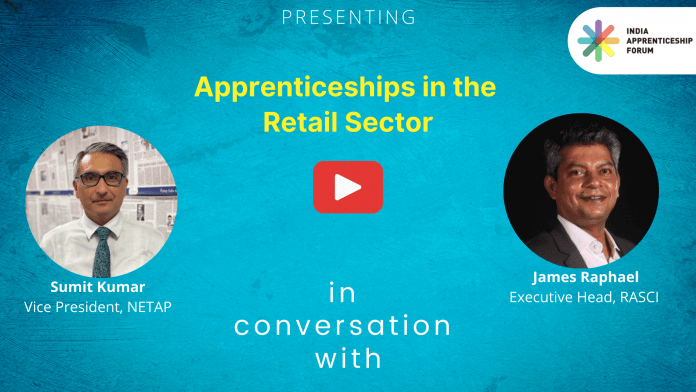 Under the Skill India movement of the government to create skilled resources, a lot has happened in the area of apprenticeship in the last couple of years. And a lot more is anticipated to happen as stated by the Finance Minister in the budget speech referring to further reforms in the apprenticeship act. The Retailers’ Skill Council of India is responsible for facilitating skilling initiatives to prepare the current and the future workforce in the retail sector. Mr. James Raphael, Executive Head of the Retailers’ Association Skill Council of India (RASCI) joined the session on IAF with Sumit Kumar, VP NETAP to share his valuable views and experience and also to enlighten everyone with the initiatives undertaken by RASCI to promote and scale apprenticeships in India. Here are the excerpts from the conversation.

Where there is a life there will be retail. Every business is actually moving towards gaining the consumer share and hence it is evolving to become omnichannel. There are traditional retailers who are modernizing themselves, modernized retailers are getting into the online space and then there are retailers doing direct selling. The retail sector is ever evolving. Retail is a competitive business so, whatever gets manufactured, cultivated, constructed, or developed, gets done with an intent of consumption. And hence retail is imperative. James said, ‘If you look at a 1.3 billion type of nation with approximately 10 million retailers, you’re talking about one retailer for every 130 citizens. No other world economy has this kind of luxury’.

Looking at the initiatives taken by RASCI were a little off traditional. As retail spreads across equally every year, they actually want to engage right from the general education system. If a student drops out of school for whatever XYZ reason, instead of just ending his or her career right there, James says that they can be engaged as apprentices. So the negative terminology of a dropout can be replaced as an apprentice and given respectable livelihood that they deserve. RASCI is in the initial stage of making this a routine initiative with schools and colleges. So instead of looking at this whole scenario as facilitating employers with talent, schools can take administrative responsibility for uploading profiles of such students on apprenticeship portals and make a social impact. Check out the video.

Retail sector constitutes 30% of the total apprenticeship workforce in India. Around 850-860 retail organisations are registered under the apprenticeship portal, out of which 500 or more are actively engaging. So to scale up apprenticeship in the same sector requires sheer advocacy. The good part about the reforms that have been brought about in the apprenticeship journey is that it has become a self declaratory approach. Success of an apprentice from a trainee to a full-wage employee is the crux of the entire process. Improvisations and adaptations are happening sector by sector according to their own capabilities. A 12-minute job interview can not give the real personality of an employee but a 12-month program can give you access to that. So isn’t it a win-win situation for the apprentice and the employer? Check out the video

Degree apprenticeships were announced last year under NEP 2020. The UGC has given clear cut guidelines on making apprenticeships a part of the curriculum.  It will obviously make vocational education more aspirational. And mainstream education with some vocational studies will be a good blend. But definitely, it involves a lot of participation, engagement of the academics with the industry to get this implemented. James strongly believes that in every sector nothing is aspirational at the frontline job level. Be it banking, carpentry, big construction, IT, security. However, beyond a particular level across all the sectors it becomes aspirational. Hence his submission to all partners in this skill ecosystem is never to mobilize a candidate for the job or the vacancy that is inherent. Mobilize the candidate for the career when he or she wants to stop and that journey is dependent on him or her. And that way we can handle the attrition rate of the apprenticeship programs, said James Raphael.

We do hope that apprenticeships and vocational education gets tremendous success and a pass to get support from organizations like RASCI and other sectors to make it more successful. Sumit Kumar thanked James, for his precious time and sharing his valuable inputs and opinions which were essential for the transformation of the system to make it more acceptable for the vocational education and skill development for the youth of our country. You can watch the entire conversation here. Check out the video.