Even with rising education levels many countries continue to grapple with a dual employment problem of how to skill youth and how to ensure those skills match industry demand for jobs. The jobs-skills mismatch has turned the spotlight on governments adapting their education and training systems to cope with changing market forces. Enterprises too find themselves on the back foot as they try to keep pace but face severe skill shortages among youth.

This is the sentiment upon which the ILO in 2017, supported by the JPMorgan Chase Foundation, launched the ‘Skills that Work Project: Improving the Employability of Low and Middle-Skilled Workers’. The project advocates ‘quality apprenticeships’ as a critical pathway to equip youth with industry relevant skills through real world exposure to work thereby enabling a smoother transition from education to employment. The G20, L20 and B20 (business and trade union organisations of G20 countries) have committed to the Declaration of the G20 Initiative to Promote Quality Apprenticeship which states:

“Given the importance of apprenticeship for improving the skills of our workforce, we agree to increase the number, quality, and diversity of apprenticeship through the actions outlined in the G20 initiative to Promote Quality Apprenticeship (Annex 3) based on national circumstances. We recognize that quality apprenticeship is based on the full engagement of social partners, businesses and workers. We encourage B20 and L20 to follow up their previous joint commitments and implement this initiative”

The Initiative consists of Ten Actions to boost the quality, quantity, and diversity of apprenticeships. 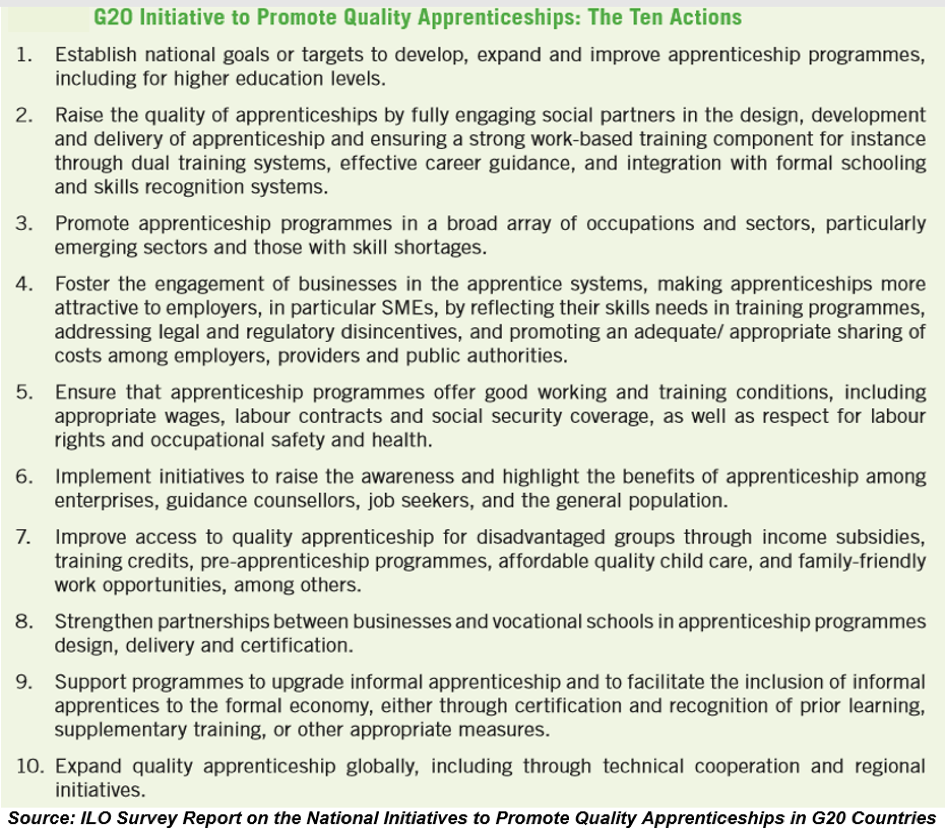 We discuss key findings of the ‘ILO Survey Report on National Initiatives to Promote Quality Apprenticeships in G20 Countries’[i] which spawned from the Skills that Work Project.

In Part I, we look at key findings and good practice on the first 5 of the 10 Action Points, from a survey of 15 influential governments of the G20.  From India, responses were provided by the Ministry of Skill Development and Entrepreneurship (MSDE). We delve specifically into findings from the Indian context. 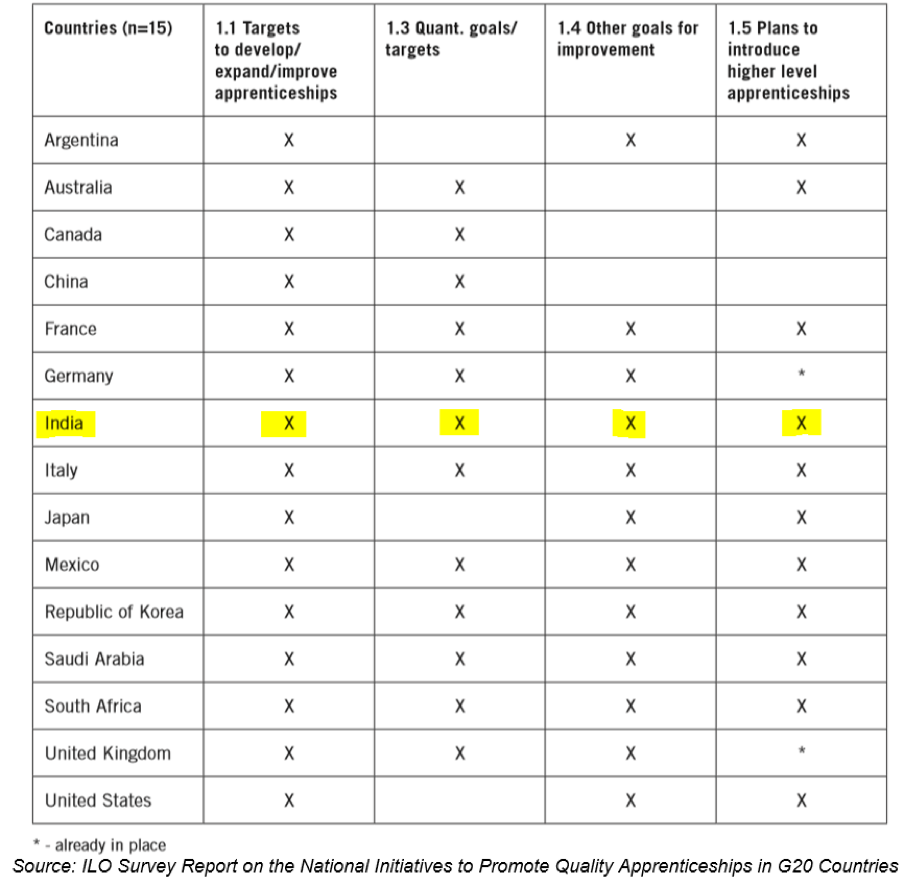 As we know, India’s goalpost to place 50 lakh youth in apprenticeships by 2020 was promulgated by the National Apprenticeship Promotion Scheme (NAPS) launched in 2016 to infuse new energy into apprenticeships as a win-win model for both industry and youth towards building a large skills-based workforce. However, as of January 2017, a mere 1.43 lakh youth had registered under the NAPS[ii] and at best there are 3 lakh apprentices in the country under various public and private models. India has its work cut out to boost its apprenticeship numbers. Of the 71 million enterprises, a paltry 50,000 of them engage with apprenticeships.

Coming back to the survey, in response to a question on non-quantitative goals to strengthen apprenticeships, the MSDE cited revamping the curricula for all apprenticeship courses with 63 of 258 completed at the time of the survey. We feel this is imperative, and needs action with much more gusto given the severe jobs-skills mismatch where it is estimated that a whopping 65-75% of youth entering the Indian workforce are either not job ready or are unemployable.

2. Raising the quality of apprenticeships

The survey found that a majority of governments seek to strengthen the involvement of social partners (workers’ and employers’ organisations) in recognition of their vital role in the design and delivery of apprenticeship training.

In the first component of Action 2, using a 5-point scale, responses were gathered for 6 different activities and how involved social partners were. 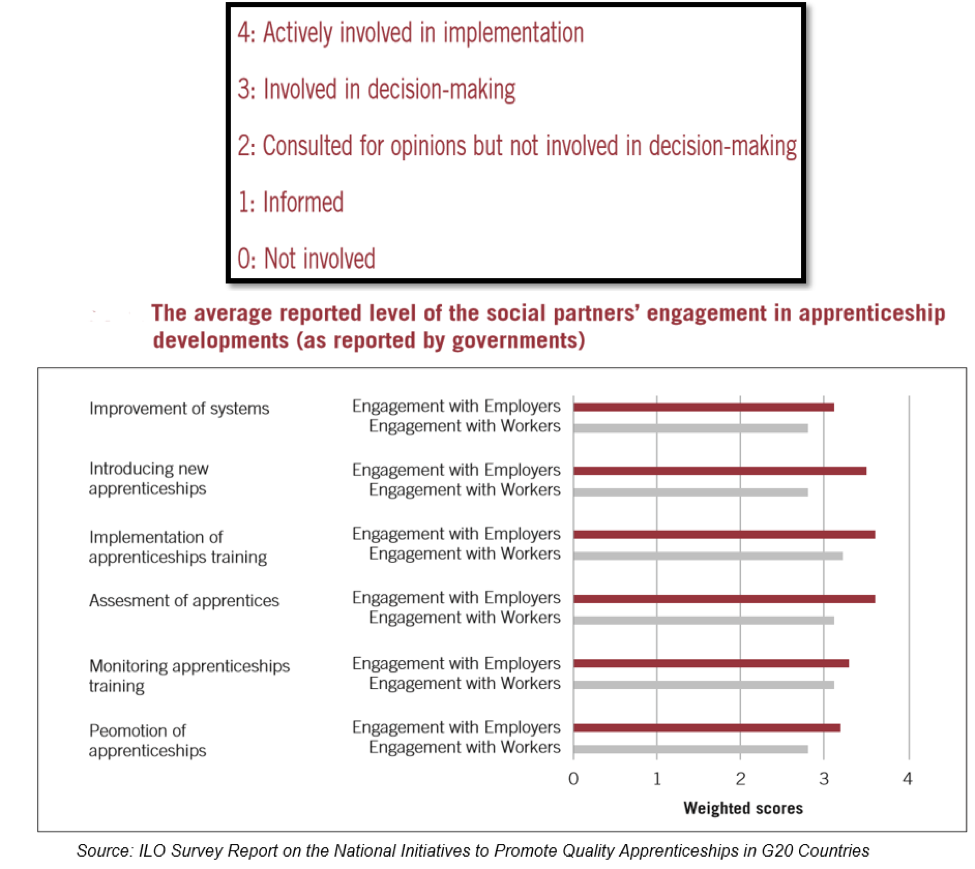 The third component of Action 2 was split into three questions:

3. Promoting apprenticeship programmes in a broad range of occupations and sectors

The top six occupations were found to be:

These are further split into three occupational groupings: 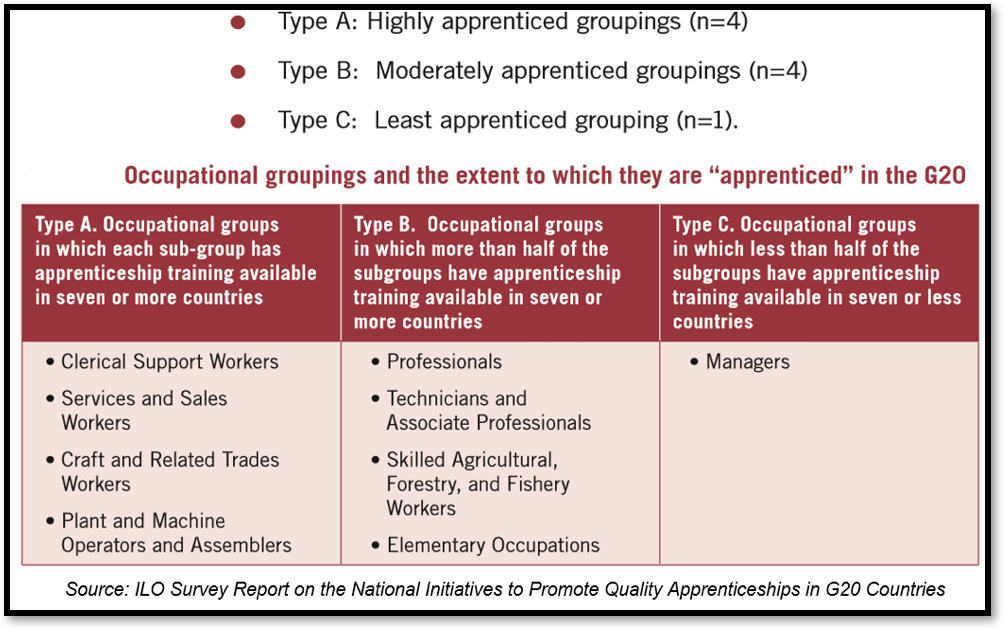 As we have noted in other articles, a key amendment to the Apprentice Act (1961) in 2014 was the tabling of a new category called ‘optional trades’- employer led and demand based, shifting flexibility to employers to design and customise apprenticeship training in any trade or occupation to suit their business needs.

4. Fostering the engagement of businesses in the apprenticeship systems

This is to bring SMEs into the fold of apprenticeships given their economic importance.  To the question on how countries fostered the engagement of SMEs in apprenticeships, the MSDE cited the NAPS and its financial incentives for employers, and the role of State Apprenticeship Advisors in hand-holding employers through the apprenticeship process.

However, we feel a lot more can be done to encourage and engage SMEs whose staffing needs and HR processes typically vary from larger firms given their size and resource constraints. The Fifth Economic Census estimates there are 20,62,124 MSMEs (micro, small and medium enterprises) in the country employing 6 or more staff. This is an exciting untapped potential; if each establishment engages even one apprentice, the MSME sector alone can generate 20 lakh apprentices.[iii]

Back to the survey, only two countries- India and the U.K reported specific mechanisms to identify SME skilling needs. The MSDE stated the Industry Apprenticeship Initiative (IAI) to identify and communicate SME skill needs. However, our own search has not revealed any more information on the IAI.

To the question of legal or regulatory reforms, aimed at incentivizing apprenticeships in SMEs, the MSDE pointed to industry-friendly changes to the Apprentice Act in 2014.

Large differences exist in the way apprentices’ working and training conditions are structured. In the absence of specific provisions for apprentices, social security benefits seem to be a measure of whether apprentices are considered regular employees or not, and what is determined directly between employers and workers. 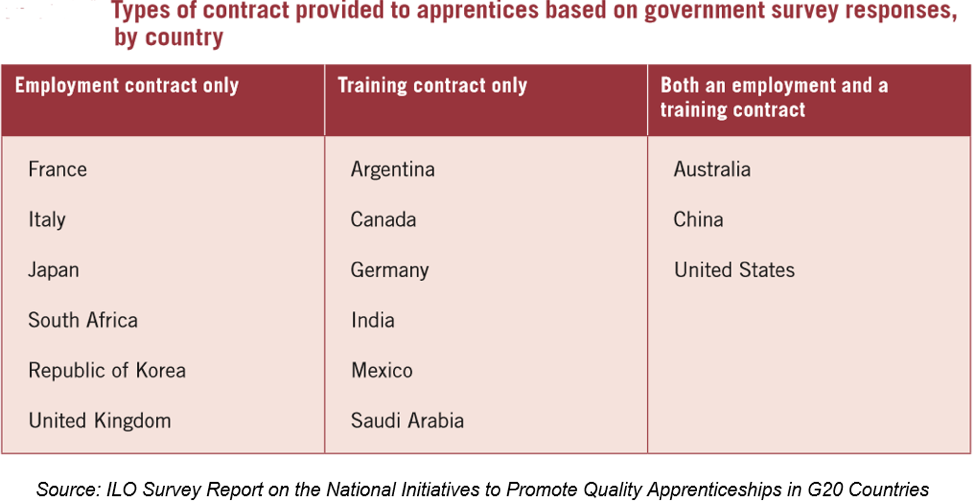 All determinants of working and training conditions, except training content, were found to be regulated by law in over 60% of the countries, with wages and leave entitlement the most heavily regulated. In India, wages, leave, training content and working hours are all stipulated by law. The MSDE did not respond to the question on social security. We feel there should be room for collective bargaining in India in determining working and training conditions, especially to allow SMEs to shape training suited to their individual needs which a more generalised law may not be able to accommodate or address. 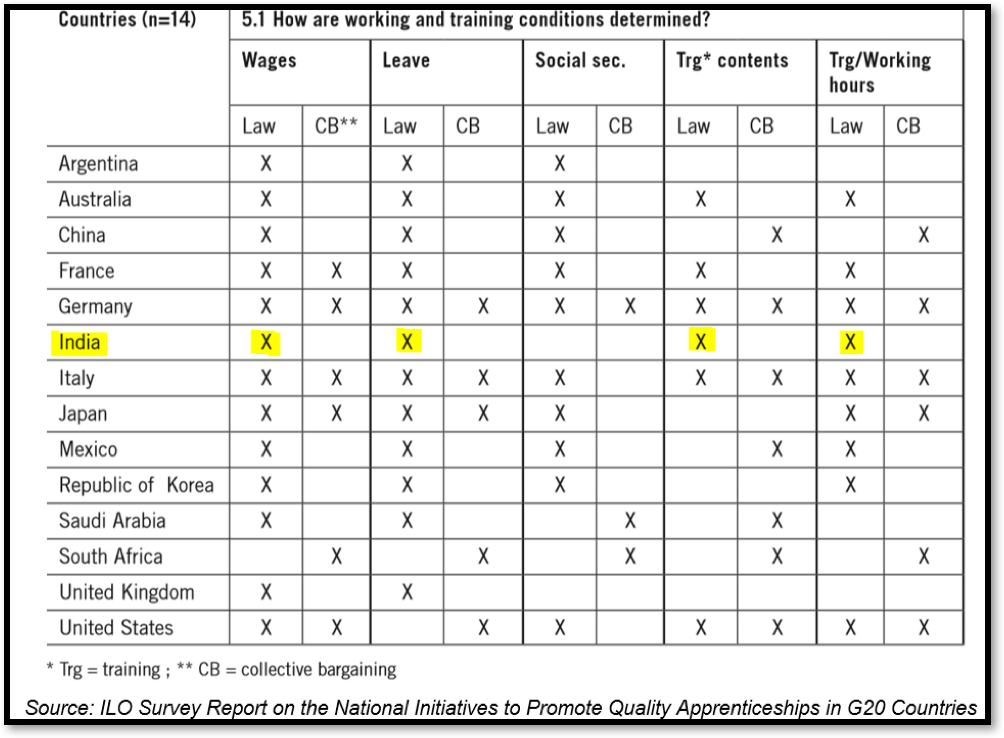 Overall, it was found that countries tend to have legal provisions for the employment of apprentices rather than for the actual training delivered. We feel this is definitely an area that calls for improvement as the legal premises under which training takes place will go the distance to ensure consistency and quality of training.

In Part II we look at key findings and good practice on the remaining 5 Action Points. 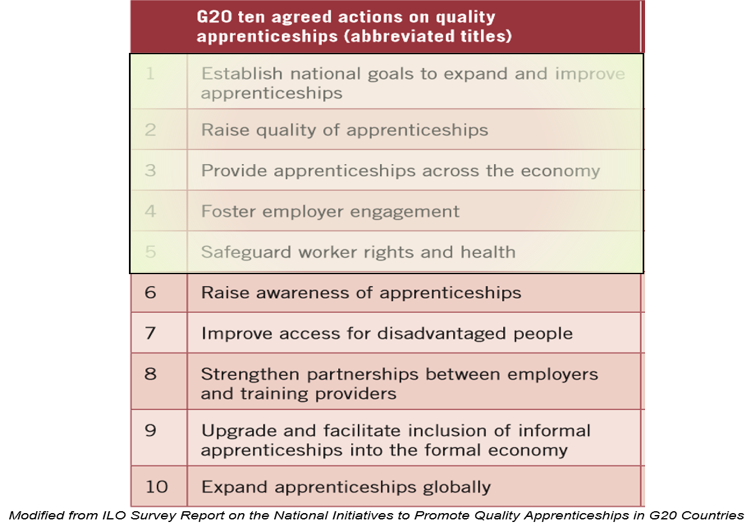