‘Are you willing to think long-term and invest (in apprenticeships) on the front end, because you’re going to have the return on investment through the career of a successful and productive employee?’ Werner Eikenbusch, Head of Talent Management for the Americas, BMW.

For an employer, taking on board an apprentice should not be a financial burden. Businesses the world over have reported a direct financial return investing in the training and mentoring costs of an apprentice. Where are the cost savings? Starting from business benefits derived from a productive apprentice as they learn on the job, to savings from lower recruitment costs the gains are many.  Then there are indirect financial benefits such as higher staff morale is reported from businesses taking on apprentices which leads to lower staff attrition. 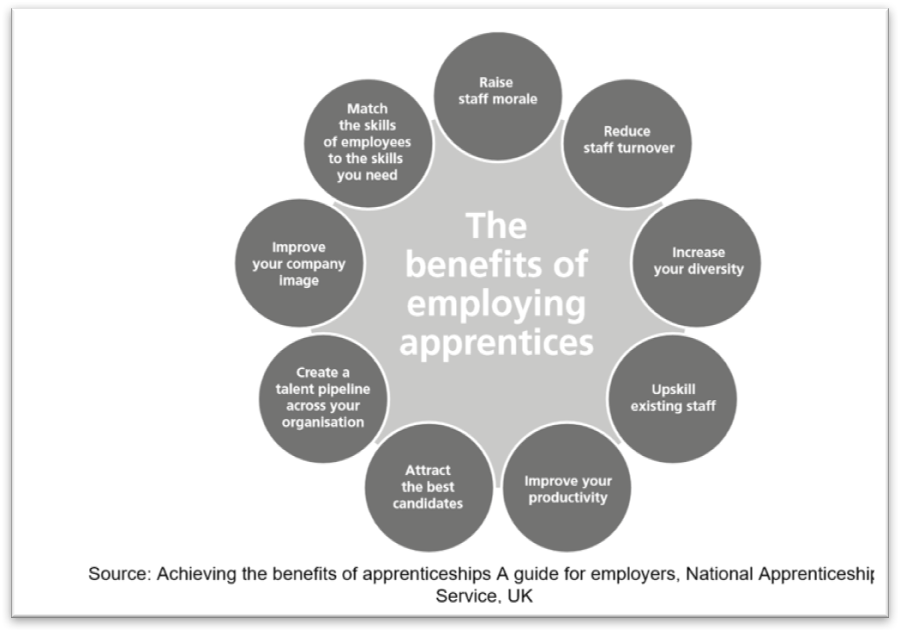 Countries with more developed apprenticeship systems have often cited a positive financial return on investing in apprenticeships. Apprentices in Switzerland reportedly contributed over AU$350 million to the Swiss economy in a single year, whereas Canadian apprentices yielded $1.47 for every dollar spent on them.[i]

Similarly, even before an apprentice is fully trained, research from the UK has revealed an average positive net gain of £1,670 annually to businesses from work based contributions of an apprentice. The same research found another interesting angle to financial benefits of apprentices. A quarter of consumers said they were willing to pay more for goods and services from companies employing apprentices in recognition of the common good that apprenticeships do for the UK’s youth.  This means, when aggregated across key economic sectors, this feel-good factor translates into an additional £18 billion annually in consumer spending.[ii]

How to Measure Financial Benefits

To single out an example, Pepper-a UK financial services firm tracked an employee’s financial contribution to the business by measuring their retention, progression and productivity. An apprentice becomes productive when task flow and quality assurance tracking systems show that apprentices are contributing equally to the job as more experienced staff. The Pepper exercise found that their apprentices become fully productive in 8 months, and in around 18 months of retaining the apprentice the firm breaks even on its investment including the cost of training.[iii]

Typical Costs to an Employer

Let’s explore wages and training costs a bit more, typically the biggest costs to an employer. Apprentice wages, and any social benefits constitute the largest slice of apprenticeship costs. In Austria, wages make up 57 percent of total costs in year one and 72 percent in year three of an apprenticeship.[iv]

Graduate, Technician &Technician (Vocational) apprentices: Stipend is shared equally between the employer and the central government.

Trade apprentices: Cost of stipend borne solely by the employer as per minimum wages of a semi-skilled work

The second biggest cost is that of instructors or mentors which may include internal and external trainers. In Germany the average cost of training is at 23 percent of total investment in an apprenticeship programme.iv

It goes without saying that an employer will be interested in apprentices only if they see net benefits. Typically, companies reap financial benefits from investing in apprentices if they are able to retain the apprentice for a longer period as a permanent employee after the apprenticeship training.

The duration that an apprentice sticks around for is therefore a key cost-benefit consideration for an employee. Companies that are open to longer term benefits from apprenticeship training may be more willing to invest in apprenticeships and may also pay higher wages to attract and retain the best candidates.

Benefits to employers is usually more for the unskilled aspects of work carried out by an apprentice as it requires minimum or no training investment. On the other hand, the benefits from skilled work takes longer to be realised as the corresponding investment in training for the same is also significantly more.iv

Overall, employers see a long-term positive net financial benefit when the pace of wage growth of an apprentice is slower than productivity.

To explore one such study, stay tuned for our upcoming blog post Do Employers See a Return on Investment in Apprenticeships?

[ii] The Benefits of Apprenticeships to Businesses (2015), Centre for Economics and Business Research

An interview on with Utkarsh Desai – GM, Human Resources, Blue...

The Link Between Vocational Skills, Education and Earnings

How to get a dream career even without a degree

India needs Degree-linked Apprenticeship for both students and employers