Do Employers See ROI in Apprenticeships?

‘For each dollar spent on apprenticeships, how many dollars are returned to the investor—the employer, the trainee, the government program, the union, or whoever paid for apprenticeships?’ ROI as a percentage seeks to answer the question, ‘Why should I hire apprentices?’ FutureEd Consulting Education Futurists Inc.

SMEs employ around 40% of the country’s workforce which presents an enormous opportunity for a staggering multiplier effect in generating skills and jobs through the apprenticeship route. Apprenticeships are more widely found in medium and large enterprises (around 70%) and less in SMEs; this is the case world over. The reasons are often a lack of awareness among HR and management, informal nature of work and questions about the financial sense of hiring apprentices. Hence SMEs tend to lose out on developing skills and retaining talent long-term which as evidence shows is a major cost-benefit advantage of apprenticeships.

In this post, we look at computations that can help employers figure out if apprenticeships make financial sense.

This study with a particular focus on SMEs has examined ROI from investing in short and long-term apprenticeships (as defined by the Indian Apprentices Act) in five Indian companies ranging from manufacturing, retail to hospitality. The findings provide affirmation that benefits of apprenticeships outweigh costs; in fact, return on investment in an apprenticeship programme is often recouped during the training period itself or in the first year of retaining an apprentice as a full-time employee. 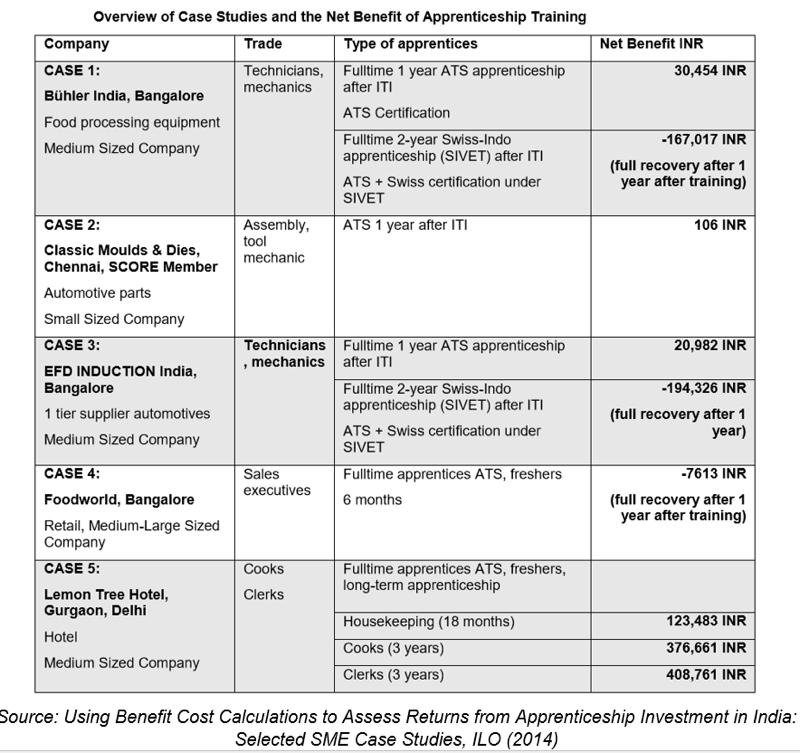 To unravel the costs employers typically bear for apprenticeships a method of calculating ROI has been developed that can be used at the minimum to:

The ROI method typically uses a balance-sheet approach as demonstrated below. 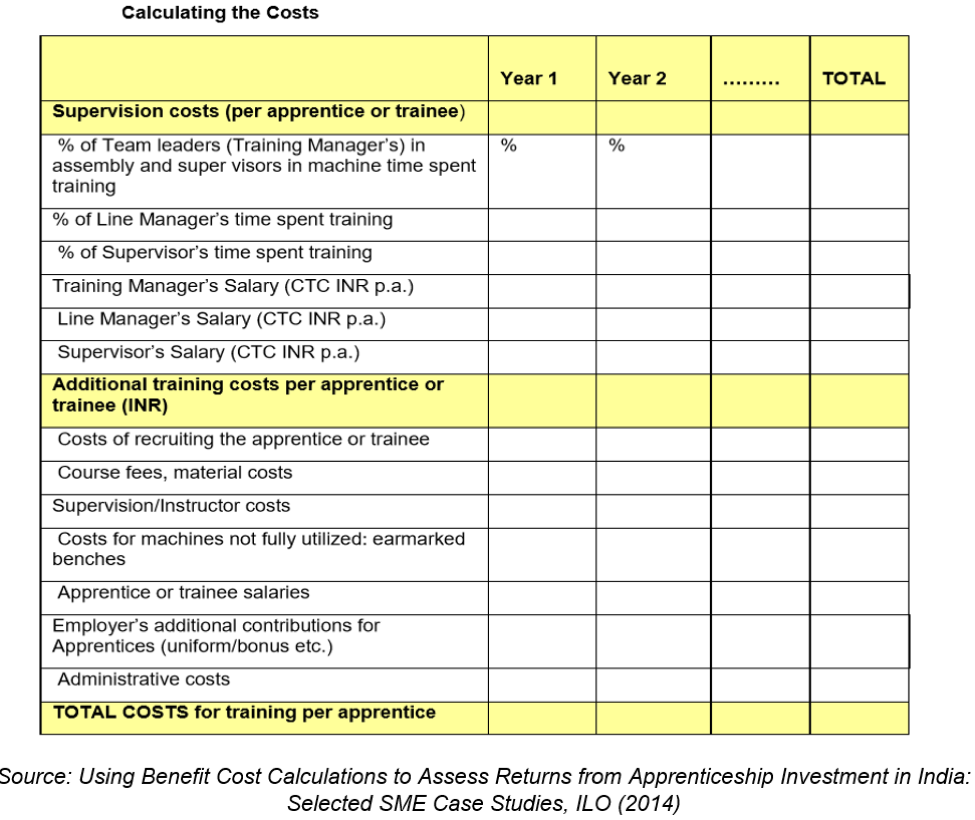 The new enterprise-wide ROI method is benefits based which is a departure from previous studies which focused more on cost of training and hiring preferences without focusing on net short term (what an apprentice’s work is valued at) and long term benefits (lower future recruitment costs).  In time the benefit-cost model has become a standard and is used by more mature apprenticeship systems the world over as a more accurate snapshot of costs-benefits of apprenticeship training. 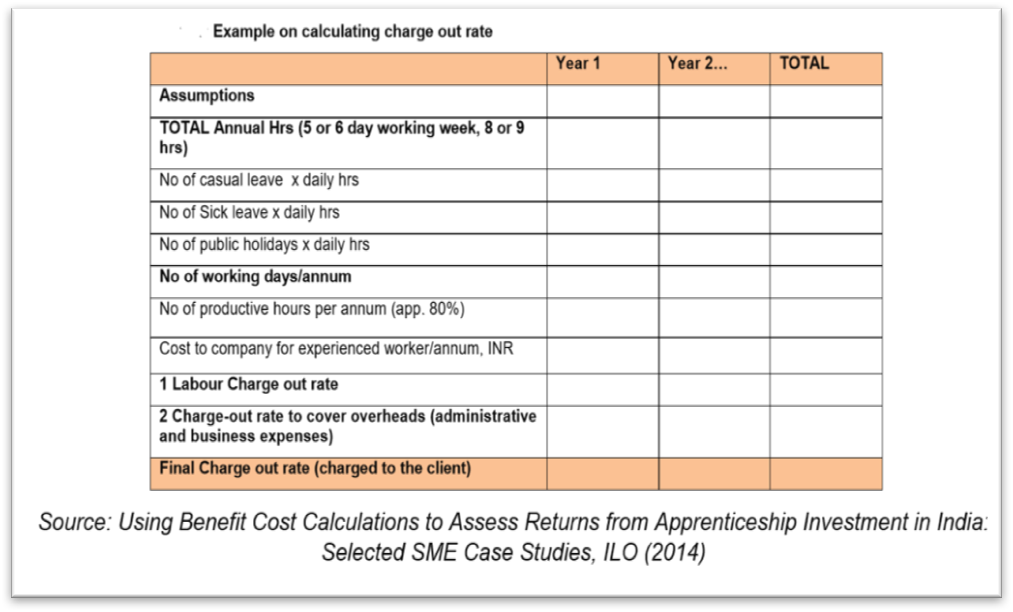 The calculation of ROI in this method bases wage and productivity of an experienced worker as a reference point. Variances across sectors must be considered as for example in retail and hospitality an apprentice may start earning the wages of a fully experienced worker on completion of training but in more technical sectors this may take more time. 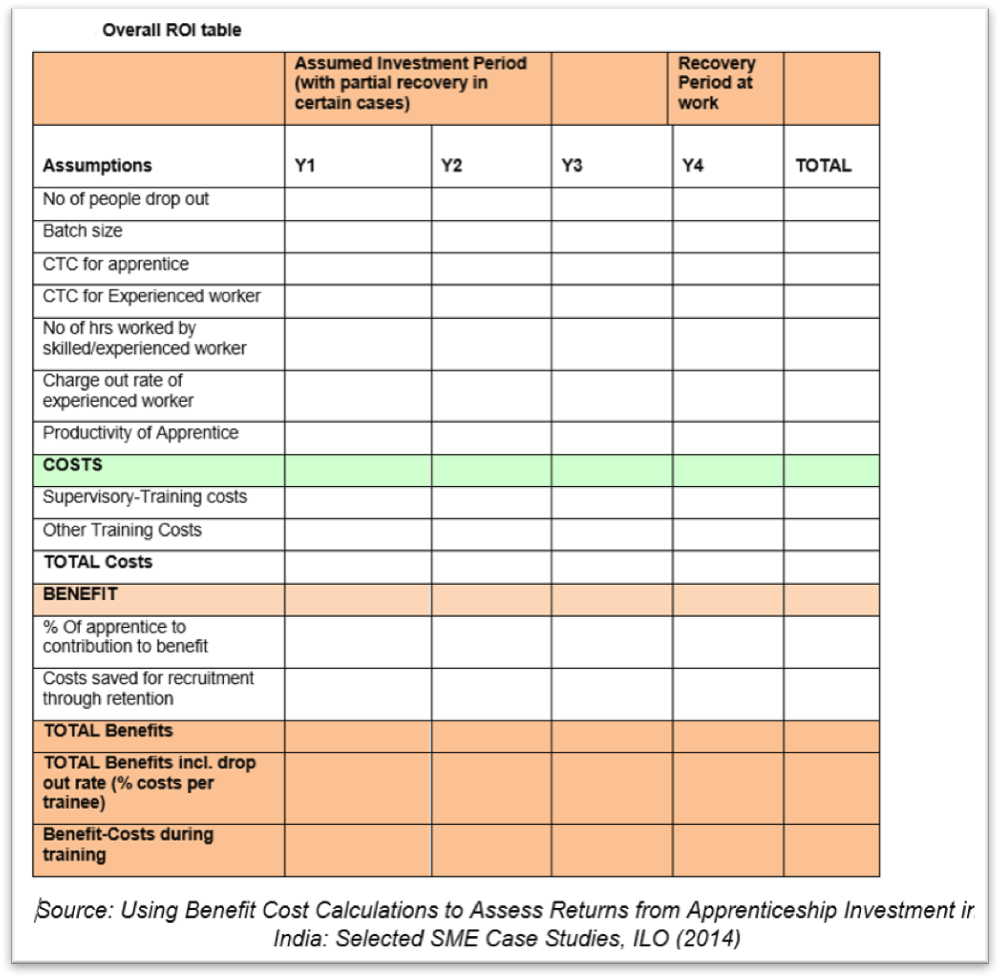 Using the above methods, the report found a net benefit in each of the five cases, recovered at different lengths of time depending on the duration and types of apprenticeships.

How quickly an apprentice starts to become productive and returns a financial benefit compared to cost of training also depends on the employer’s motivation; quick to becoming productive (which could imply less skill acquisition) means faster recouping of costs. However, a longer term approach where high training costs are borne by an employer in view of retaining an apprentice as a full-time employee and thereby reaping benefits of low recruitment costs, building a pipeline of skilled workers and higher non-direct benefits such as boosting employee morale is a common perspective taken by larger enterprises with the resources to ride out to a later breakeven point.

The two approaches are suited to different situations such as the type of work/trade, the manner of training, retention of apprentices and finally the impact on the workforce of the enterprise and the industry as a whole. SMEs typically are found to spend less on training as they prefer apprentices to be job ready faster which is a challenge for policymakers to tackle.

Ultimately whatever the decision it impacts benefits achieved and costs incurred differently. 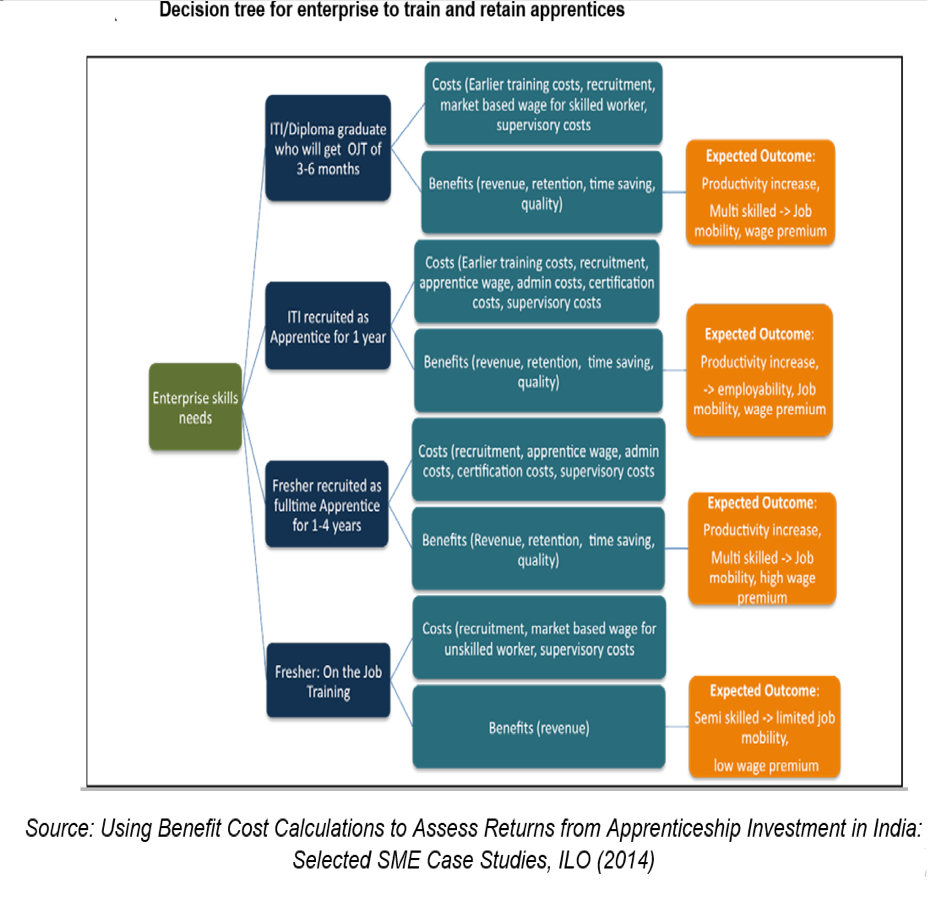 From the study, we look at the case of Foodworld for whom retention of trained sales executives through the apprenticeship route was a top priority. The training period itself is of short duration, 6 months, where the first month is in the classroom and the next five on the shop floor.

The company’s average cost per apprentice during training is Rs. 64,800. ROI is positive or neutral during the course of the training, provided the apprentice did not drop-out. During this stage, the productivity of an apprentice is at 60% of an experienced worker. With over 50% of apprentices dropping out from the programme and an even higher attrition rate post completion, the company had to factor these in when calculating ROI and incurred a loss of Rs. 7,613 per apprentice during the training period. Here retention becomes critical to recoup losses. If Foodworld is successful in retaining their apprentices each rupee invested would see three times the benefit in the first year of employment alone. After year one an ROI of Rs. 1.8 is reached for each rupee spent. 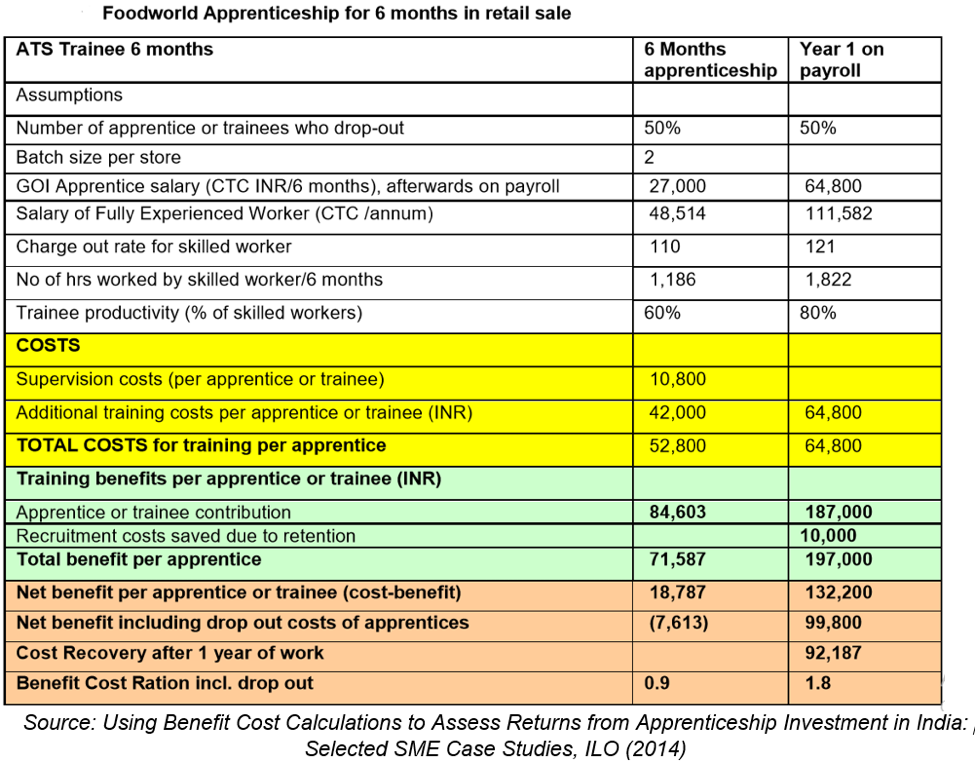 A common thread across the case studies in this report is that longer retention and lower attrition of apprentices are key to maximising ROI.

This study provides a useful framework for Indian SMEs to adapt to their circumstances a benefits based ROI analysis. Such evidence building, if taken up aggressively by more firms can become a powerful dataset and rationale for hiring apprentices and making informed decisions on training and recruitment. The study believes it is important that the ROI method be used in conjunction with other tracking systems which can provide deeper insights into key skill development markers such as employability, wage premiums, sectoral differences etc.  Other elements to calculating ROI can be added such as attaching financial values to outcomes such as productivity rise of apprentices, higher retention, time saved etc.