Skill building has taken centre stage what with India’s conundrum around jobs, employment and wages. Often overlooked is the significance of robust data on various skilling metrics or skill indicators without which all good intent is akin to a wild shot in the dark. An acute paucity of credible and quality data stands in the way of harnessing the benefits of apprenticeships and impedes efficacious decision making.

Cutting through the rhetoric, and what we believe is a first in the availability of solid data-driven insight on apprenticeship metrics in India- is the newly released Stipend Primer 2019 by TeamLease Skills University Thought Leadership and the National Employability Through Apprenticeship Program (NETAP).[i]

Want a copy of the Apprenticeship Stipend Primer 2019?

If yes, please click here and give us your details. We will be happy to mail you a copy.

We welcome the timeliness and relevance of this report in the context of strong recent advocacy for apprenticeships in India as a bellwether of skilling youth towards higher employability and meaningful careers.  The promise of apprenticeships to fill a looming skills gap can only come to fruition if decision-making shifts from perceptions and back of the envelope estimates to facts backed by strong data.

Likewise, this report states that ‘apprenticeship programs promote skill acquisition and improve employability better than other skilling initiatives, and result in 67% of those trained being gainfully employed.’

Sadly, the vocational route in India is often undervalued as a second-rate low-paying profession for the ‘less academically inclined’ devoid of the prestige of traditional education. But is that really the case? Far from it, as hard data reveals.

The most salient finding which gives apprenticeships a prodigious shot in the arm – as it stands, apprenticeship stipends command a significant premium over minimum wages. Get this, around 41% higher than stipulated minimum wages in a majority of sectors and cities. 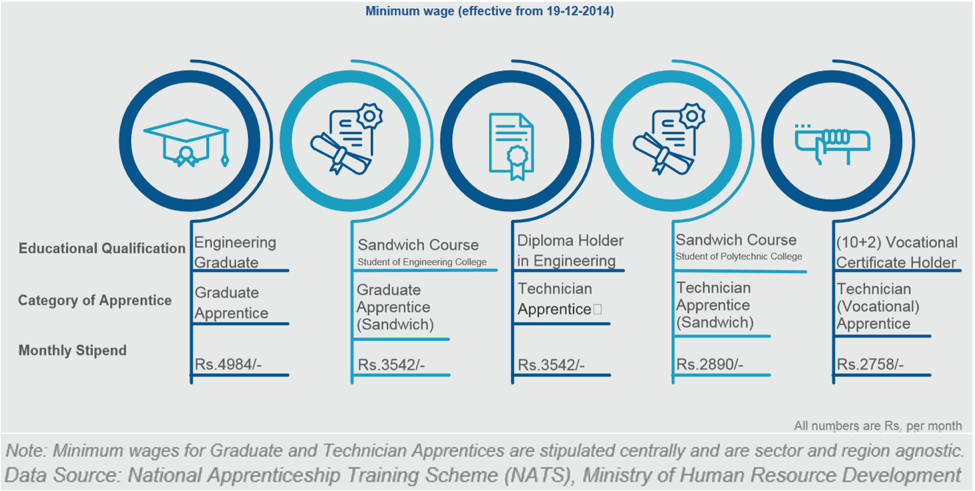 Want a copy of the Apprenticeship Stipend Primer 2019?

If yes, please click here and give us your details. We will be happy to mail you a copy.

Stipend payout data to apprentices by employers was analyzed under government programmes such as the National Apprenticeship Promotion Scheme- under the Apprentice Act- and Other Employability Enhancement Schemes (OEES) such as those run by NETAP.

The top sectors witnessing a whopping premium above minimum wage are:

Both in manufacturing and services, monthly stipend payouts are in the average range of Rs. 9,000 – Rs. 10,000. In all sectors and qualifications, OEES median stipends for top roles outstrip market (Apprentice Act) median stipends by 7.66%. 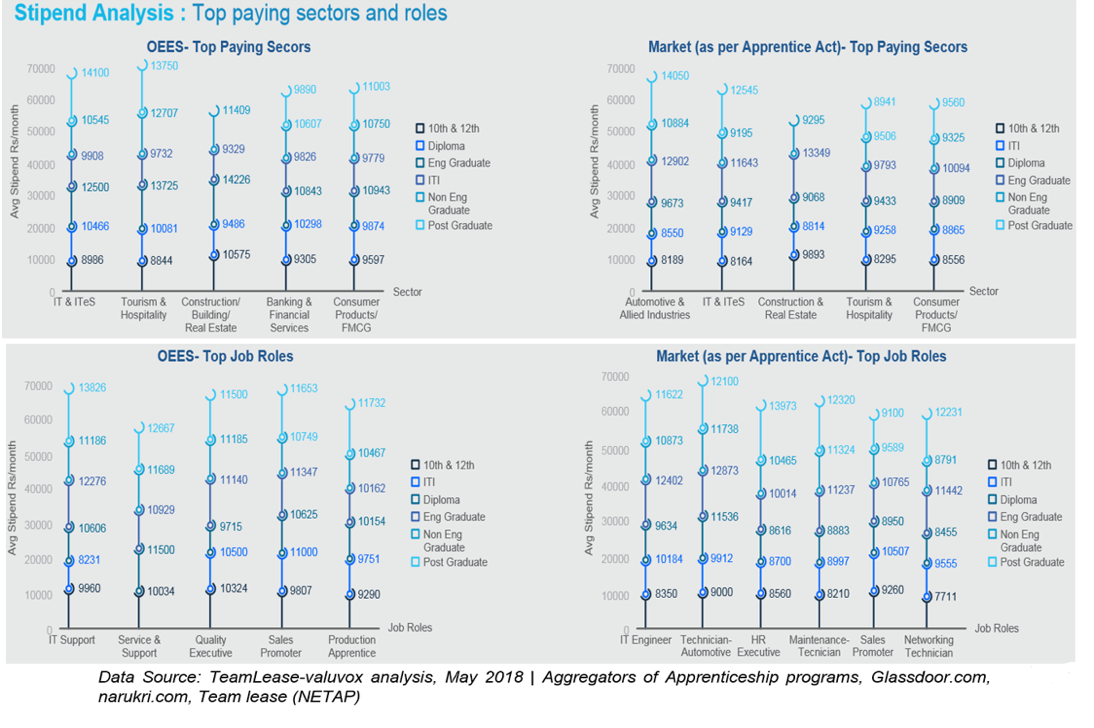 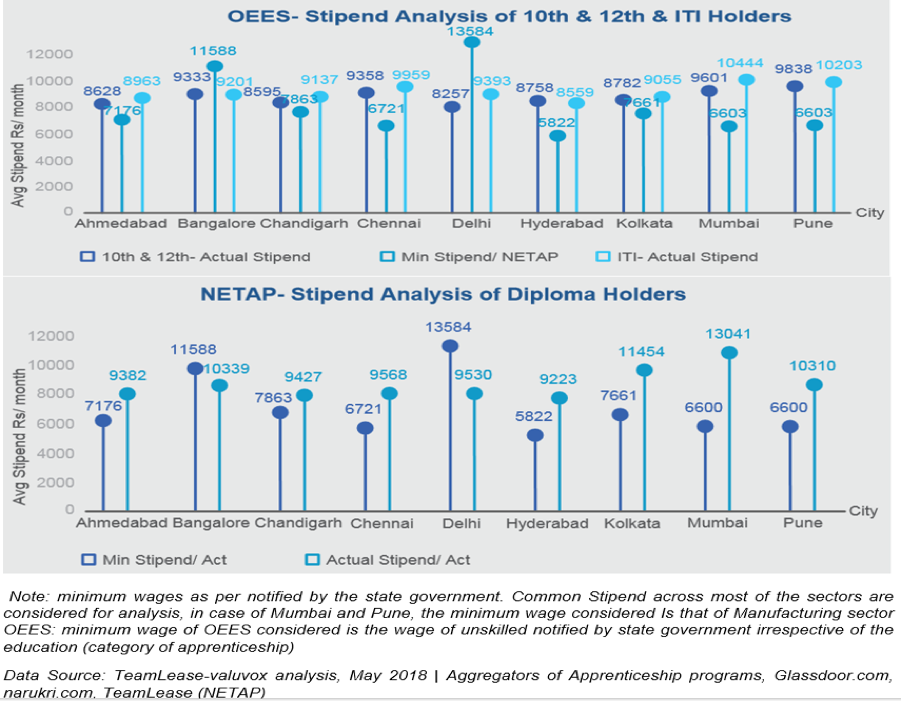 Domain knowledge and analytical abilities take the top 3 spots in an employer’s skills wish-list in specialised domains such as IT, Finance; attracting stipend premiums of a minimum of 21%-39%. Conversely, soft skills are highly ranked in support functions such as Administration, HR. 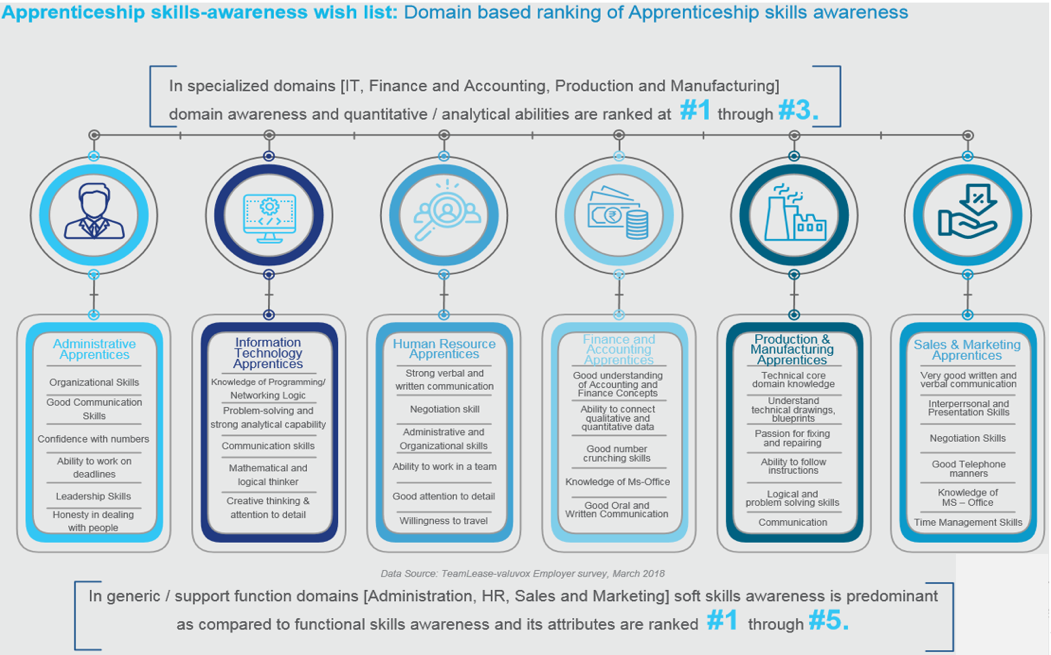 In pre-apprenticeship scenarios, 46%-77% of employer respondents of the survey seek essential soft skills from candidates. We find this is in line with general hiring trends. The India Skills Report 2018[iii] similarly found ‘adaptability and positive attitude’ in the top 3 skills required by companies alongside domain knowledge. 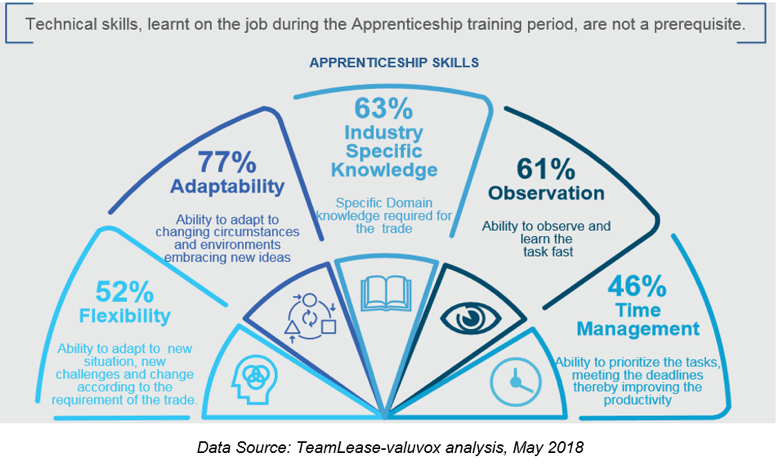 Although stipend expectations in Delhi and Bangalore are among the highest, NETAP stipends for 10th & 12th pass-outs and Diploma holders in those cities are well below the minimum wage. The report does not qualify the reasons and we can expect more clarification in subsequent editions.

In Part II we examine other metrics such as apprentice engagement and mobility.

You may also like: Key Markers in Skills Training for Policy Makers – Part I and Part II