Referring to the growing importance of India’s F&B and restaurant sector Saloni Nangia, President, Technopak, a leading consultancy firm has said, “As an industry, eating out and calling in is a large industry and is much bigger than the FMCG sector. It’s growing at about 10-12 per cent every year and is a sustainable growth model because eating out and calling in will comprise a large share in the consumers’ spending as years evolve. Currently, the industry is at the beginning in India. In developed countries, it took the industry 10-20 years to reach the size and scale they are at now. In India, modern formats have just started developing.”

The hitherto enormous role of unorganised players in the Indian food services sector, such as road side stalls, dhabas, is seeing a decline as market share of the unorganised segment is set to reduce from 70% in 2013 to 57% in 2022. Organised players will continue their grab of the pie, at a CAGR of 16% between 2017-2022 which translates into a market share increase to 43% in 2022 from 34% in 2017.[i] 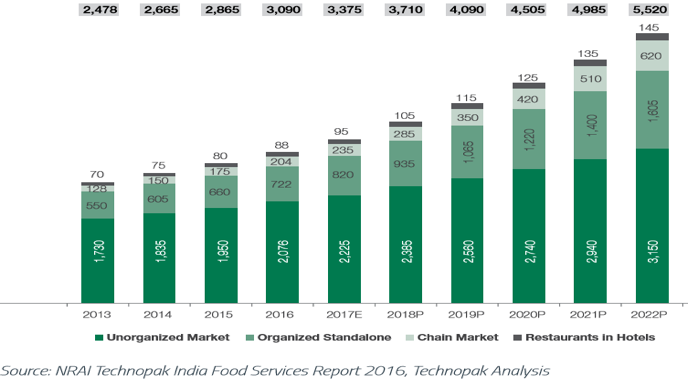 Mumbai and Delhi NCR have an equal split of 11% each of the of the overall food services market. Pune, Ahmedabad, Bengaluru, Chennai, Hyderabad and Kolkata use up 20% share while the next line of big cities and rest of India make up the other half. i

Vocational training in an era of digital learning

How organisations can become temples of skilling

India is a country of the young and aspirational where half its population is under the age of 24 making it one of the youngest consumer markets in the world. If we consider 15-54 as the working age range India will have 135 million people or 20% of the world’s working age population by 2022. The U.N. World Urbanization Prospects 2018 report states that about 34% of India’s population live in urban areas which is an increase of about three percentage points since the 2011 Census. Young Indian urbanites who are nuanced and experimental in their life-style choices have given a fillip to the restaurant and food services sectors in terms of taste, value and convenience. Higher disposable income and a rising middle class population have further propelled dynamic changes in these sectors.

The foodtech market in India is projected to grow at a CAGR of over 12% between 2016 – 2021.[ii] Two percent of the food services market is app based according to Food Service India Magazine, with one million daily phone orders and 30 million online orders. This hugely important trend in food services consumerism has in turn increased play by mobile wallet companies like Paytm, Mobikwik and Freecharge to make it easier for consumers to order in. No slowdown is expected in this trend as a combination of youth and internet usage in the country is only expected to grow. According to the Mobile Association of India (IAMAI) and Kantar IMRB’s ‘Internet in India 2016’ report internet users in India was estimated at 432 million in December 2016.

Players like Zomato and Swiggy have revolutionised food delivery in India where online orders have become an integral part of the eating experience. This in turn has augmented services such as last-mile logistics and virtual kitchens.  Food start-ups have pushed growth in turn with dominant players such as FreshMenu and Faasos in the pure-play cloud kitchen segment. For instance, as of October 10, 2018, FreshMenu is in early discussions to raise as much as $75 million to set up additional kitchens in Bengaluru, Delhi-NCR, Gurugram and Mumbai, and to foray into new markets such as Pune and Hyderabad. On the other hand, the Indian food delivery market propelled by online food ordering is set to touch $2.5 billion by 2021 from $700 million in 2017 according to RedSeer Management. Zomato and Swiggy lead the race currently with 21 million and 20 million monthly orders respectively. Delivery services and personnel are the backbone of the online food ordering business. UberEats, the food delivery business of cab major Uber Inc. entered the segment in India last year, while its local rival Ola will be offering food ordering services via its ridesharing platform after its acquisition of Foodpanda’s India operations earlier this year. Foodpanda claims it receives three lakh orders daily and is looking to hire 60,000 delivery executives to keep pace with demand.

Slow to scale and heavy capex in the traditional brick and mortar restaurant model makes online food delivery based services much more attractive to PE and VC funding. To elaborate, according to Chennai based Venture Intelligence, since 2013 Zomato and Swiggy have received almost as much funding ($700 million) as traditional restaurant chains did ($843 million).

Property consultancy JLL have predicted around 20 million sq ft of mall space will be joining the retail sector in the next three years.[iii] On an average, around 20-25% of mall space is dedicated to food services outlets with an estimated additional need for 13-15 million square feet of real estate in the next 5 years.i This will boost demand for skilled labour across the food services chain.

How Will Employment Be Served

The Indian food services industry is characterised by an extremely high labour requirement at every stage- from procurement to delivery.  Employment in restaurant and food services is set to rise to 9.5 million by 2022 from current levels of 6.2 million. The organised segment will provide 55% of the total employment in these sectors by 2022.i

Indirect employment to affiliated activities and sectors will further generate between 8- 11 million jobs between 2017-2022.i

This translates into an estimate of around 6,00,000 skilled human resource requirement every year.  With only 50,000 graduates annually passing out from state and private hospitality institutions these sectors face a grim prospect of filling this huge employment gap.i  The National Skill Development Corporation (NSDC) has highlighted the pivotal role of restaurants as a sub-segment of hospitality where workforce requirement is estimated to increase to 78% of total labour force by 2022.

A Taste of Skilling Initiatives

Industry-level exposure for MITE students; Acceleration in the digitization of Indian education

0
Industry-level exposure for MITE students In an effort to bring in more skilled and certified individuals to the sector...
Read more
Articles

0
Making skill training in India beneficial for women When a budget of ₹950 crores was rolled out in January...
Read more