Apprenticeships and the Digital Economy

As the skills training momentum gathers speed, what with renewed government focus on workforce capacity building, how can apprenticeships stay relevant in the age of digital transformation?

Digitisation can be loosely defined as the large scale proliferation and adoption of digital technologies by consumers, businesses, and governments. Some call it the ‘Fourth Industrial Revolution’ marked by technologies such as big data, machine learning, Internet of Things, robotics, etc.

Digitisation may mean access for the first time to information, education, health care, and e-commerce for millions of Indians. Remote access to health services over the internet could improve health care for as many as 400 million Indians, and digital payment platforms could potentially connect 300 million Indians to banking services and credit.[i]

Digitisation in India could result in productivity hikes amounting to the output of 19-29 million workers in 2025. This could see an annual economic impact in the $550 billion to $1 trillion mark in 2025 which represents a 20-30 percent incremental economic growth between 2012-2025 or in other words six times the current revenue from the IT services sector.i 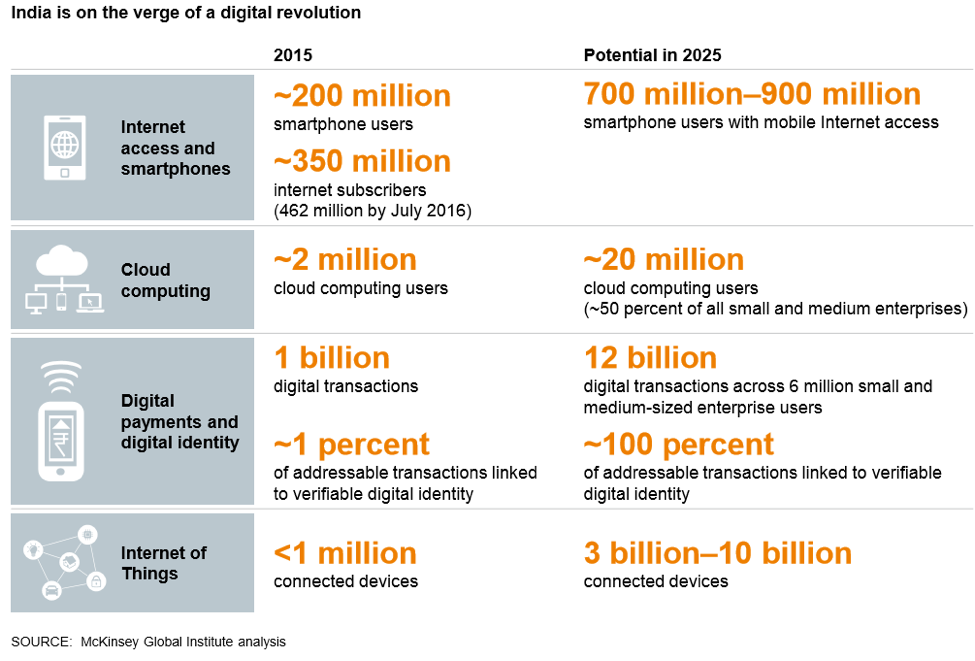 Such technology disruption has the potential to re-define India’s work landscape and people experiences across services such as healthcare, rural development, e-governance, banking, e-commerce, education, and better matching of skills with suitable opportunities.

Any phenomenon that is perceived to replace humans at work is a cause of major alarm in the Indian context. However, research shows that while at least 30 percent of activities in 60 percent of occupations are likely to be automated in the next 10 years, less than 5 percent of whole occupations are likely to undergo complete automation as many tasks require a human interface. This holds true even for labor-intensive sectors, which are crucial for job numbers in India[ii]. Ergo, automation will impact the nature of how tasks are performed within occupations rather than obliterate entire occupations.[iii]

A recent major enterprise survey of 774 Indian micro-sized to large (over 25,000 workers) companies shines the light on how technology adoption and digitisation are affecting jobs for Indian companies. The next few sections focus on key findings of The Future of Work in India – Inclusion, Growth and Transformation – Oct 2018, World Economic Forum-ORF which states that nearly twice as many companies surveyed reported that they took on more workers on adopting industrial technologies and machinery, rather than having to cut down on their workforce.

This meant that 33 percent of companies witnessed a change in skill requirements stemming from the adoption of new technologies. Retraining existing workers and boosting on-the-job-learning were the main approaches cited to deal with changing skill needs. We think this augurs extremely well for apprenticeships as a potential route to skilling and re-skilling in an era of increasing digitisation where employers are progressively recognising the value of workplace-based training to meet a business’s changing needs.

Allaying fears that digitisation will lead to rampant job losses, the survey found that net job creation is expected over the next five years across the sectors of banking & financial services, textiles, retail, and logistics. More encouragingly, 33 percent of surveyed companies said that in the last five years, a ‘need to hire more workers and the need for new skills’ was found to be the largest impact on the workforce due to the introduction of technology and digital services in the workplace.  Only 19 percent of companies said that their workforce reduced owing to the adoption of technology. This is quite striking in its departure from often popular hypotheses that new age technologies will spell the end of a large number of workers. 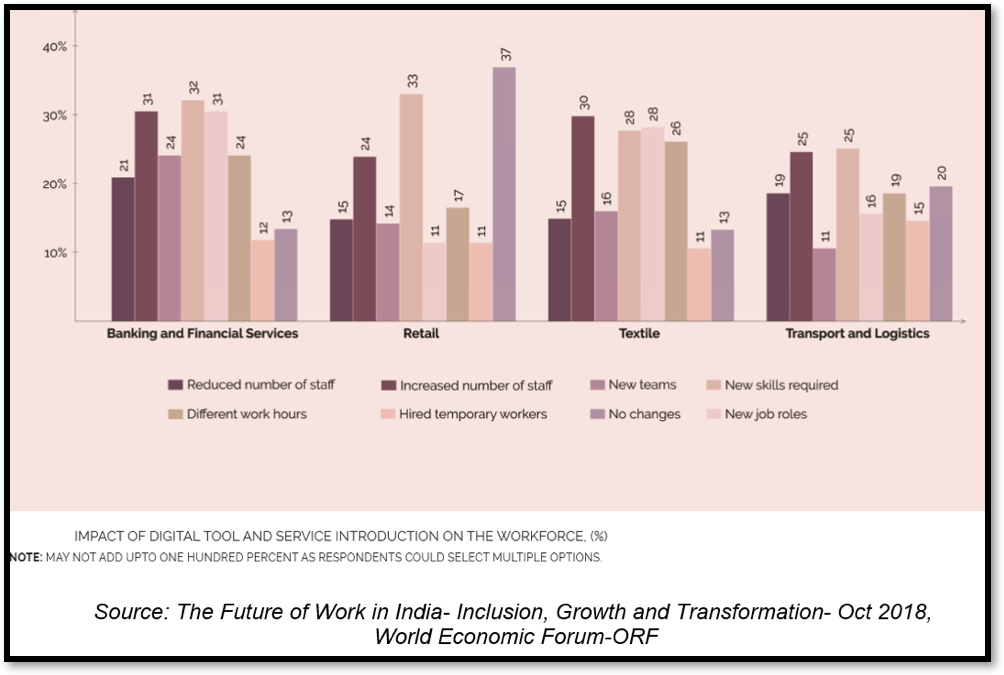 Where Are the Changes

Even with digitisation, the expected areas of jobs growth as stated by companies in the survey are in customer service, sales, IT support, accounting & auditing, marketing & public relations, albeit with redefined functions. As an example, a digital accounting system will require accountants to be also knowledgeable about data security concerns. Hence, the introduction of new digital tools and systems may well result in the overlapping of skill sets between what have traditionally been different job roles. 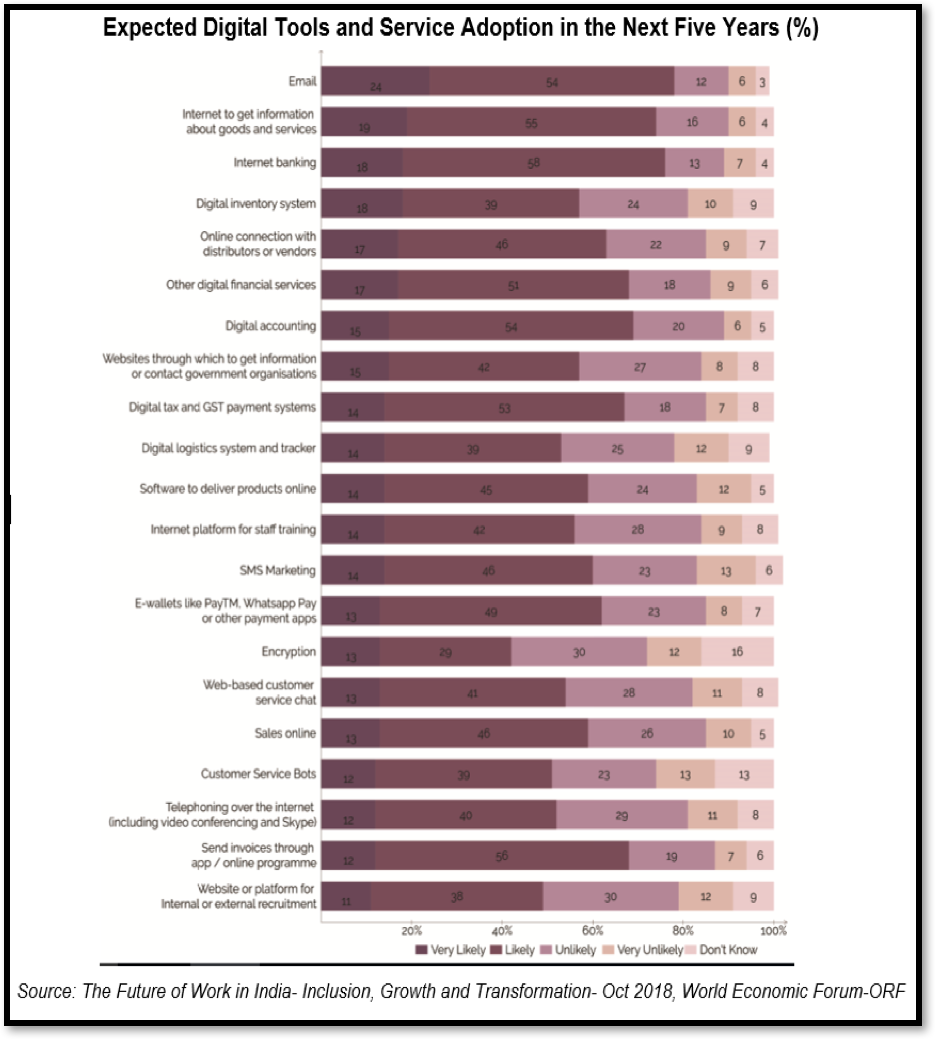 Prominent skill gaps observed by companies when adopting new technology have been in the delivery of products and services to customers online, soft skills such as communication and creativity, and operational skills such as inventory and logistics tracking, knowledge of GST payment systems etc. To illustrate, if email or chat support is being introduced as the primary means to interact with customers, employees will require not only basic computer skills but also strong communication and empathy skills.

The retail sector stated the highest adoption of digital tools as a means to widen their customer base buoyed by sharp increases in mobile phone ownership, internet connectivity, and e-commerce. On one hand, e-commerce is increasingly bolstered by cloud computing, big data and social networks requiring high levels of new age technology skills to design and run these complex systems. At the same time, jobs with lower skill levels on a shop floor are also seeing a transformation, not a replacement. Take the case of a salesperson. A digital check-out system may mean that the person needs to undertake additional functions requiring supplemental skill sets such as the ability to run the new system and also to trouble-shoot in the event of a malfunction.

Similarly, the introduction of robotics on the factory floor may mean repetitive routine tasks carried out by production workers may now be broadened to include new skills in machine maintenance and quality control.

40 percent of companies from banking and financial services reported that they took on board new workers in the last five years on the back of digitisation, whilst 21 percent had to reduce their workforce. Correspondingly, 33 percent of textile, transportation and logistics enterprises hired new staff owing to adopting of new technologies or machinery. 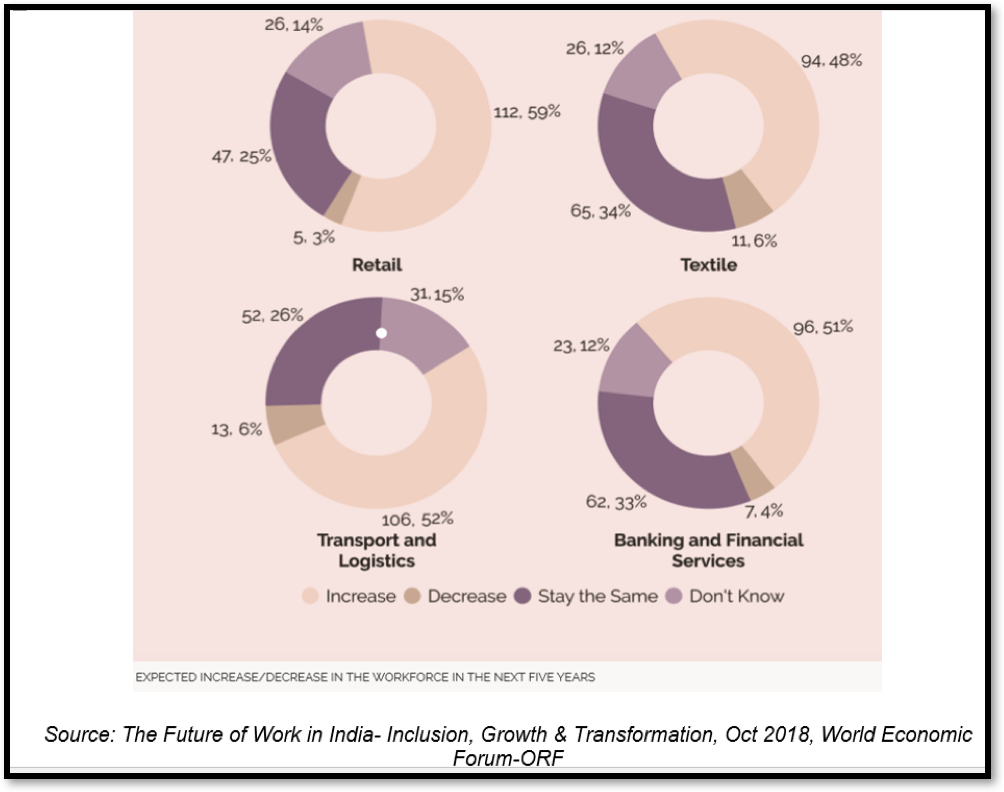 In recognition of changing skill requirements in job roles, an overwhelming 84 percent of companies cited re-training and on the job skills training as the preferred routes for capacity building.

Concurrently, from another recent survey, 76 percent of Indian youth stated being very interested in pursuing a skill development programme and view skilling as key to enhancing their employment opportunities and wages.[iv]

From basic digital skills to in-work apprenticeships, opportunities for skilling on the back of digitisation should be a high priority for employers and governments. From a policy perspective, a ‘digital apprenticeship taskforce’ can be hugely beneficial to increase both the quality and quantity of apprenticeship schemes. There is an urgent need to introduce youth to careers requiring digital skills through linkages with industry such as apprenticeships. 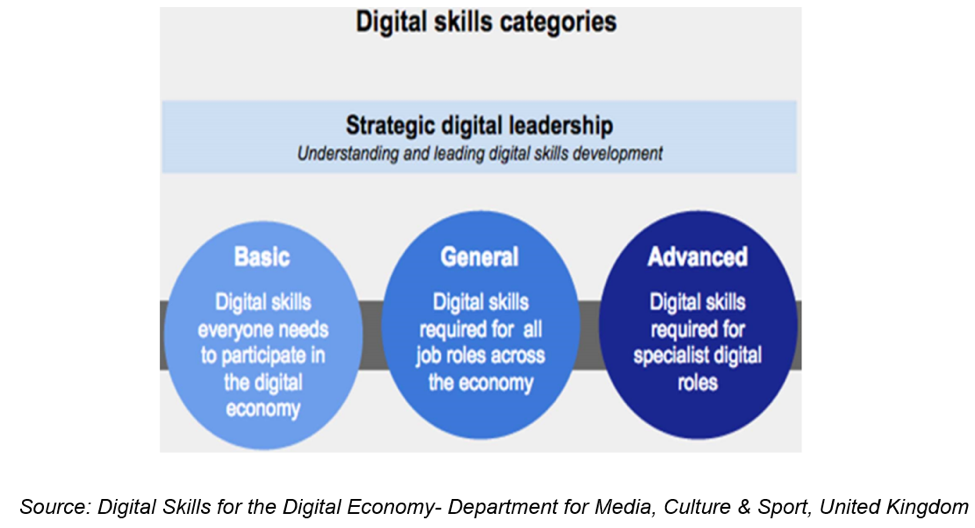 Other research has similarly found that 75 percent of businesses believe that the technology skills gap can be bridged through digital and technology apprentices.[v] For example, in the UK, apprenticeships are core to developing IT skills in the future workforce in the face of estimates predicting that 90 percent of jobs will require digital skill elements in the next 20 years.[vi]

Signaling efforts towards future readiness, back home, an MoU has been signed between NASSCOM and the Ministry of Electronics and IT for re-skilling two million technology professionals and skilling an additional two million youth looking to enter the labour force over the next few years. Citing the potential for schemes such as Digital India to create 50-75 lakh jobs, Ravi Shankar Prasad, Union Minister of Law and Justice and Electronics and IT, said, “Let me assure you that new technology would create more jobs as it happened when computers came into the scene decades ago.”[vii]

[iii] The Risk of Automation for Jobs in OECD Countries: A Comparative Analysis,” OECD Social, Employment and Migration Working Papers no. 189, OECD publishing, (2016). M. Arntz, T. Gregory, and U. Zierahn