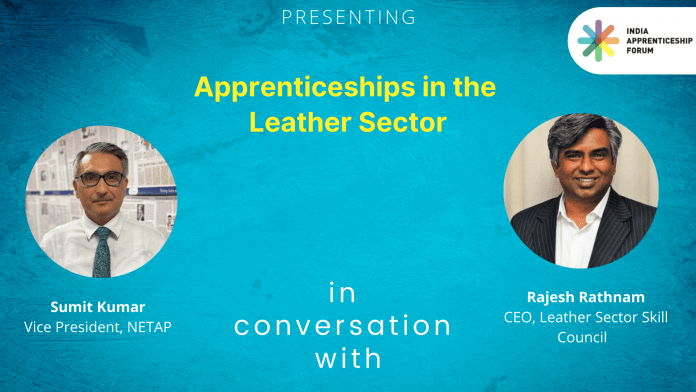 For another session in the Apprenticeship Dialogue Series, India Apprenticeship Forum invited Rajesh Rathnam, Head of the Leather Sector Skills Council, which is responsible for facilitating skilling initiatives to prepare the current and the future workforce in the leather sector. He was invited for a one on one discussion with Sumit Kumar, VP NETAP. Mr. Rathnam joined the endeavor to create an enabling ecosystem for apprenticeship by creating awareness and understanding within the industry and the youth and to influence the regulators to make this system simplified for execution. Under the Skills India movement of the government to create skilled resources, a lot of action has happened in the area of apprenticeship in the last couple of years. And a lot is anticipated to happen in times to come.

Also Read: Apprenticeships in the electronics and electrical sector

The Sector Skill Council for Leather is one of the first five sector skill councils which started in 2012. It was registered and started operating in 2013. So since it was promoted by one of the export promotion councils, that’s for leatherette sculpture for leather exports, they were the promoting body. The scope of the council was pretty limited because the council was only managed by exporters. The leather sector, predominantly, is an export-driven business. All Indian manufacturers are only contract manufacturers. India is not a brand owner of any big products and basically works as a supply chain industry.

Rajesh Rathnam shared that the leather businesses generally have medium to small business owners. But there are also people with over 500-1000 Gross turnover. Companies like Tata International manufactures some of the finest leather boots. And they’re not publicly traded companies and are mostly family-driven businesses. There was a hurdle to pacify these old business owners about scaling the industry. So the challenge primarily was to convince them about the change in landscape and that there is a need to scale more initiatives as technology is taking over everything.

The size of the leather industry is about 4.4 million, that’s approximately close to 50 lakhs people. The leather material can be used as a whole or to make stuff like bags, shoes, etc.  So there are various subsidies within the sector itself. The task here was to scale the skill gap depending on each sub-sector.  It’s a cluster-based industry. Every cluster has its own challenges. Many challenges were based on the demographic area of the factory. The north part of the country had different issues while the south had its own problems. Also, there is a bit of upscaling or rescaling which needs to be done based on the season change. The leather industry wants to help workers by getting them into formal employment rather than working as a daily wager. Watch the full conversation here

Apprenticeship has been a no-touch to this industry. Initially, apprenticeship was for manufacturing or engineering kinds of products. That’s proven to be a myth over time. However, they convinced the employer that over a period of time these trained apprentices will become an asset for the company by becoming a supervisor and managers, and so on. Traditionally, the leather industry was getting people who would drop out of school with no basic literacy. But as time is changing, the industry wants people to come and join the workforce who have a degree or want to pursue a degree. It’s an opportunity to learn and earn at the same time for apprentices. Watch the full conversation here

The principle of skill development is about lifelong learning. The lifelong learning process both at the learner as well as employable side- degree apprenticeship opens a whole new way. Colleges are not really making the kind of degrees that employers want in their workforce. Students come with great academic marks but fail to impress on their practical skills. With the help of degree embedded apprenticeship, the employer can train the apprentice with the required skills sets along with traditional classroom training. Also, apprenticeship should be taken as a mission for scalability. Basic education begins at schools. Mr. Rathnam believes teachers should be trained with the knowledge of apprenticeship and be able to educate kids about the benefits of getting enrolled in apprenticeship training programs. In schools and colleges, students should be taken out on industry visits to understand the dynamics of a working environment. Watch the full conversation here